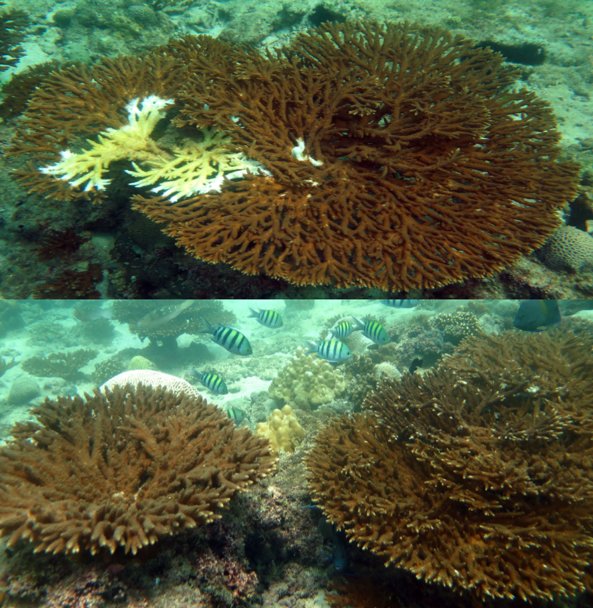 The resistance of corals to diseases is highly dependent on their ability to maintain healthy surface microbiomes, a community of microorganisms such as bacteria and fungi. For several years, corals have been shown to harbor unique microbes on their surfaces, but the mechanisms of how this community is recruited and maintained were not known. In a new study published in Biology of Communications, NYU Abu Dhabi Assistant Professor of Biology Shady Amin, together with Philippe Schmitt-Kopplin of the Helmholtz Center in Munich, report that corals, although stationary organisms, can alter their surroundings by producing unique molecules that can help recruit healthy and combating parasites microbes.

Just as our health is linked to maintaining a healthy intestinal microbiome, corals also resist disease by keeping a healthy surface microbiome. The paper reports for the first time that corals are surrounded by a cloud of molecules that form concentration gradients around coral colonies and help to structure microbial communities, also known as surface microbiomes, living on coral surfaces. The implications of these findings are far-reaching, as these microbial communities are strongly linked to whether corals around the world are healthy or are infected with diseases.

Using water samples from 18 coral colonies along the Abu Dhabi coast, each of which was sampled at different distances from the surface of the coral, the researchers found that Acropora and Platygyra corals harbor bacteria and unique molecules on their surface, distinctly different from surrounding seawater. These molecules have been identified as chemo-attractive, antibacterial or signaling molecules, suggesting that they can structure microbes associated with the surface of corals. Their findings show that there is a distinct gradient of molecules around corals and that these molecules can help recruit beneficial bacteria and / or defend against parasitic bacteria.

In addition, the researchers detected molecules associated with the surface, characteristics of corals infected with the disease or white syndrome, a finding that may aid in predicting the onset of the disease.

"This is the first glimpse we have of what corals do in their immediate environment to adapt to the environment. If we understand the types of molecules that corals need to maintain a healthy surface microbiome, we can predict when diseases and bleaching will occur and perhaps even prevent them, "Amin said.