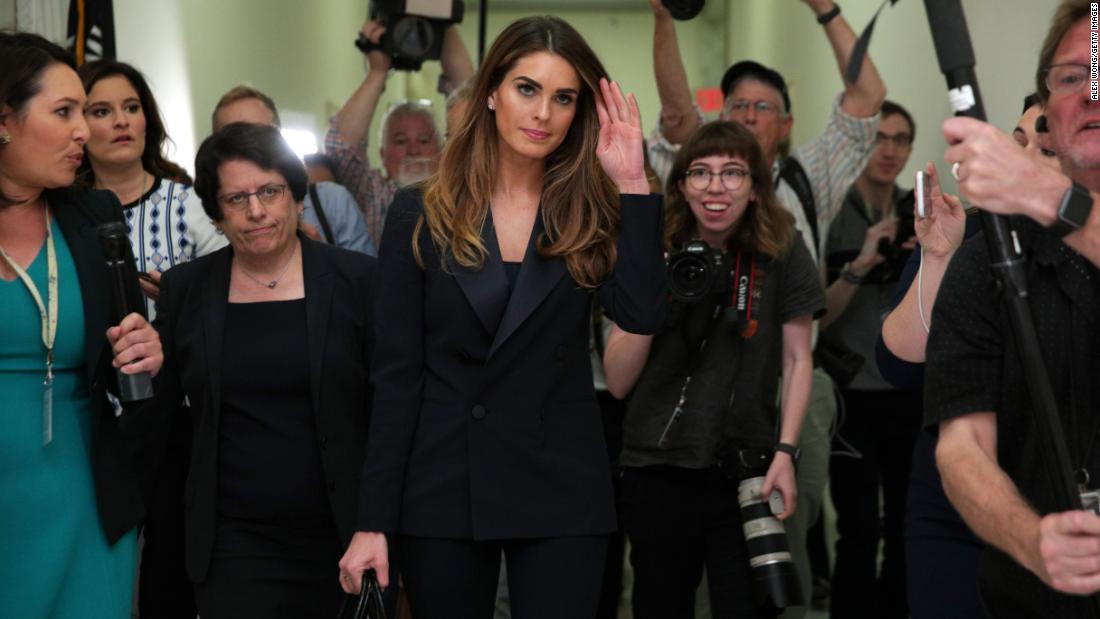 The comments are part of the 273-page transcript of Hicks's interview with the House Judiciary Committee on Wednesday, a document that revealed details behind the scenes of Trump's presidential campaign as well as his relationship with the current commander. boss.

Asked if Trump asked someone to lie during the campaign, Hicks said, "Not that I can remember."

But the transcript also showed how much the White House lawyers opposed the questioning.

According to the Democrats on the committee, Trump administration lawyers prevented Hicks from answering 155 questions. Democrats said Hicks was accompanied by his two private attorneys, three White House lawyers and a Justice Department attorney who opposed nearly eight hours to virtually every issue of his time at the White House.

The transcript shows how the Judiciary Committee is seeking – so far unsuccessful – to put witnesses like Hicks in the record on the episodes detailed in the Mueller report. House Judiciary Chair Jerry Nadler has not publicly said he will investigate impeachment, but the answers to the questions asked and objected on Wednesday will likely form a basis for evidence if the committee follows a path of impeachment.

At the same time, little was discovered during Wednesday's hearing, as Hicks and the other witnesses Democrats are trying to reach the Capitol have already testified before the special council, if not the congressional committees as well.

The interview highlights the challenges that Democrats face in influencing public opinion about Russia, the president and the obstruction, and the findings of the special council report Robert Mueller.

Hicks says the line "Russia, if you're listening" by Trump in July 2016 was a joke

Hicks told lawmakers he talked to Trump shortly after his infamous speech in July 2016 when he publicly asked the Russians to hack into Hillary Clinton's e-mails (later the campaign said it was a joke).

"The discussion was I informing him that some in the media had taken the phrase literally, and that they were worried that he was encouraging foreign governments to, you know, locate those emails, and that this was obviously something that the media felt be extremely inadequate and demanded a response from Mr Trump and the campaign on what exactly he meant by that, "she said.

In his testimony, Hicks said the comment was "a joke".

"You know, it was my understanding both of how he made the remark, and the discussions afterwards, that it was a bit ironic," she said. "This was not a comment that was intended as an instruction or a guideline for a foreign government. It was a joke, and that was the intention, based on my conversation with him, and that was it."

The Mueller report noted that "within approximately five hours of Trump's statement, GRU officials targeted Clinton's personal office for the first time." The GRU is the acronym for Russia's military intelligence agency.

A line of questioning led to an inconsistency with the testimony of Mueller's report. Lawmakers asked Hicks about the infamous Trump Tower meeting of June 2016, where the campaign was expected to receive foulness from the Russian government that could help them defeat Hillary Clinton.

Trump and his team have repeatedly said that the only people who knew the details of the meeting were the people who were actually in the room: Donald Trump Jr., Trump's son-in-law Jared Kushner and Paul Manafort who was President of Trump's campaign at the time .

Hicks told lawmakers he learned about the meeting "in June 2017," which is consistent with his testimony to the special council. But this denial does not entirely align with Mueller's findings. This report cited the testimony of Manafort's deputy, Rick Gates, who was described as a reliable and trustworthy cooperative witness. He told investigators about a campaign strategy session, days before the meeting, where Trump Jr. announced that he had a clue about "negative information" about Clinton coming from Kyrgyzstan. Gates recalled that Hicks was present for that session.

At times, Hicks said he did not remember important moments in the Mueller report.

When asked by Democrat Rep. David Cicilline of Rhode Island, if she had read Mueller's report, Hicks replied, "No, sir, I lived the Mueller report."

Hicks also told lawmakers she was not aware of any discussion of WikiLeaks within the Trump campaign, except for conversations about things that were already in the public domain.

"Sometimes there would be speculation as to whether there would be more e-mails or information released, but this was motivated by things in the media – and obviously it was not, you know, certainty." It was with speculation and skepticism, "she said.

There were also snapshots of the relationship between Trump and Hicks, one of the first members of the president's inner circle to face a Democratic-led committee.

Hicks told lawmakers that she has spoken to Trump only between five and ten times since leaving the government in February 2018.

Hicks said she would still have gone to work for the Trump team if she knew about "the hell she (she) would be subjected to." Responding to a question from Republican Rep. Louie Gohmert, Hicks said, "I am extremely grateful for the opportunity I had to serve and, yes, I would do it all over again."

This story has been updated with additional developmentsday.