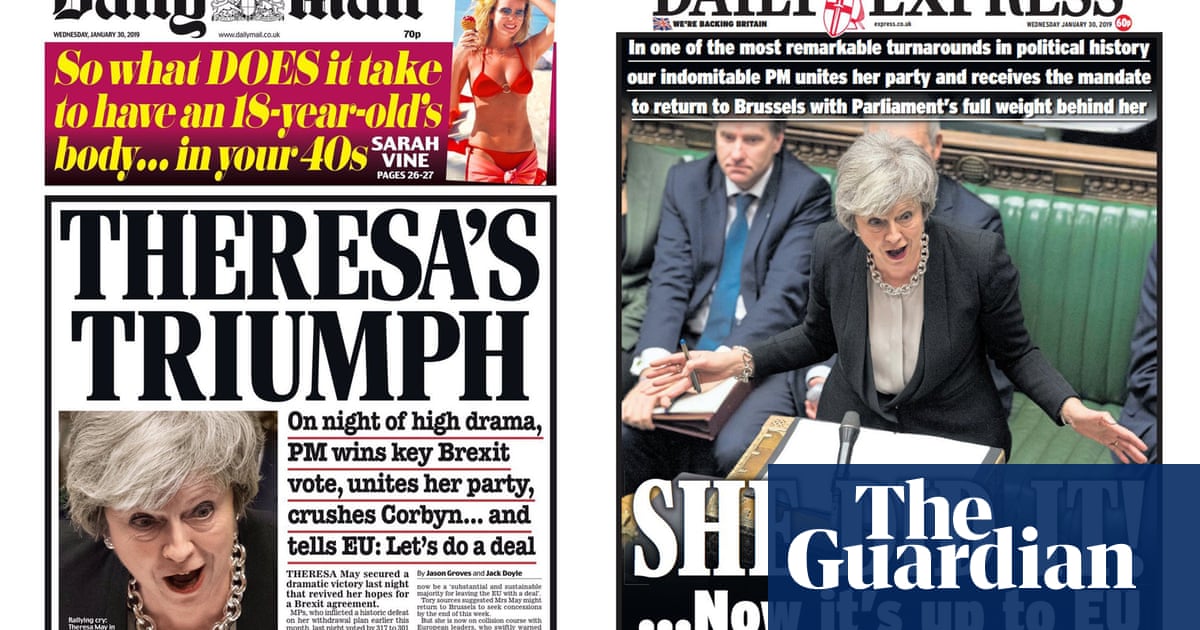 The newspapers are divided into her treatment of the latest Brexit drama production day in parliament, with conservative support titles announcing the deal as a hit for Theresa May.

But the Guardian, FT and Mirror emphasize the problem that May faces in negotiations with the EU, which said Irish support is part of the withdrawal agreement and can not be undone.

Mail's treatment is typical of the more pro-conservative pages and calls it "Theresa's triumph," as the prime minister "has revived his hopes for a Brexit agreement." The newspaper also notes that it "crushed" Jeremy Corbyn for postponing a labor amendment to win a vote on its Brexit policy.

The Expresso is even more convinced that the outcome of the vote represents a significant change in the fortunes of the prime minister's work weeks after she suffered a humiliating defeat in the House of Commons in her Brexit agreement.

"She did it!" The newspaper shouts, describing May as our "indomitable PM," who has achieved "one of the most remarkable twists in political history."

The Sun declares "Backstop from the brink" in its initial title. She says that Theresa May now has the "wind in her sails" to return to Brussels and demand changes in the Irish stop. It was a double triumph, the newspaper says, because it also managed to defeat Yvette Cooper's amendment to delay Brexit.

He also reports that May gave in completely to the radicals in his own party, agreeing to shake up his Brexit negotiation team. It will now include Julian Braithwaite, the UK's permanent representative at the UN and the WTO in Geneva, and Crawford Falconer, the Department of International Trade's chief trade negotiator.

The Times is more measured and says the prime minister has united the Conservative Party around a possible new agreement – but warns that the EU may not be willing to step down.

The Telegraph also shapes its story with the prime minister on the offensive and heads the headline by saying "May takes Brexit's battle back to Brussels."

The Guardian takes a different approach and says that May gave in to its rebellious members by accepting the Brady amendment and pushing the talks back to Brussels, despite facing unanimity from the EU that there will be no concessions in the pullback. Throughout a May photo addressing the deputies, the headline says: "May comes back to Brussels, but the EU says: nothing has changed".

The FT also emphasizes the complications ahead with the headline: "May change to rewrite the crash course of the Brexit sets with Brussels."

And the Mirror says that "it may read back from the dead … for now," but notes that if there is no future EU change, Britain will be leaving without agreement on March 29.

The Scotsman says that "May gains the support of parliamentarians for the last push of Brussels," while the Independent plays with the time difference between the vote of the Commons and the EU beating it. "Deputies from 8.41 in the afternoon send May back to Brussels for a new agreement at 8:47 a.m. in Brussels, says no," the headline says.