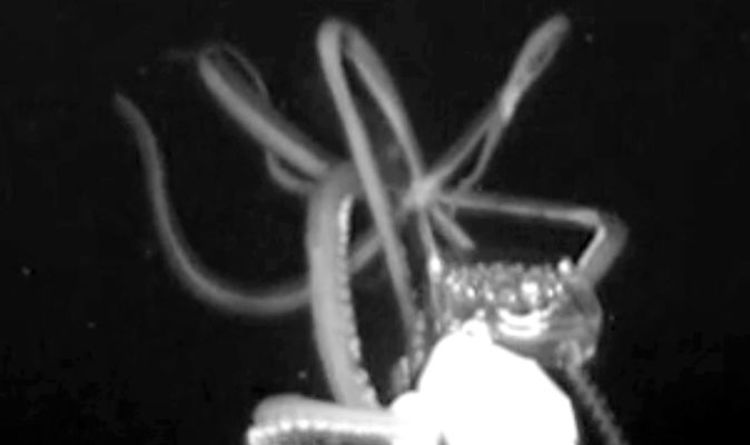 The folklore of seamen has long inspired legends of sea monsters who lived in the depths of distant seas. However, colossal creatures really do exist and, for the third time in history, a very real giant squid was captured by the camera. Researchers captured the first footage of a giant squid in 2006.

And it was six years later, before one scientific team saw another.

Now, in a remarkable discovery 160 miles off the coast of New Orleans, scientists have again registered an indescribable giant squid.

Images of the encounter show the gigantic cephalopod emerging from the darkness of the paint to wrap its tentacles around the team's jelly bait.

Then the squid quickly retreats after realizing that the object is not actually edible.

Researchers from the Journey into Midnight Expedition of the National Oceanic and Atmospheric Administration (NOAA) announced the discovery in a post this weekend.

Researchers spent the previous fortnight examining deep areas of the Gulf of Mexico to unravel the secrets of life in a world without light.

Analyzing data from movie ream from the fifth deployment of the Medusa furtive camera system, researcher Nathan Robinson saw something strange in the corner of the screen.

This, the team announced, proved to be "a huge array of weapons and tentacles coming up to attack the e-jelly.

NOAA scientists Sönke Johnsen and Edie Widder wrote: "People quickly gathered around. We immediately knew it was a squid.

After making reference to the squid identification books, the team decided that they glimpsed a giant juvenile squid.

With further examination by squid specialist Dr. Michael Vecchione at the NOAA National Marine Fisheries Services, the team confirmed what they had just seen with almost certainty.

The discovery now adds a fascinating insight into the behavior of the extremely indescribable aquatic animal.

The researchers added: We found the squid after just five unfoldings of Medusa, despite the fact that thousands of ROVs and submersible dives in the Gulf of Mexico did not.

"This suggests that the animal does not like the bright lights of the ROVs and that the invisible monitoring of the possible type with the Medusa can allow us to see what has never been seen before."

And in spite of the terrible legends of monsters and tentacles that consume men who can destroy ships, the researchers believe that the giant squid is not the fearsome kraken we think.

"More important," the team says, "we did not find a monster.

"The giant squid is large and certainly uncommon from a human point of view, but if the video shows something of the animal's character, it shows an animal surprised by its error, retreating after attacking something that at first must have seemed attractive, but obviously not food. "