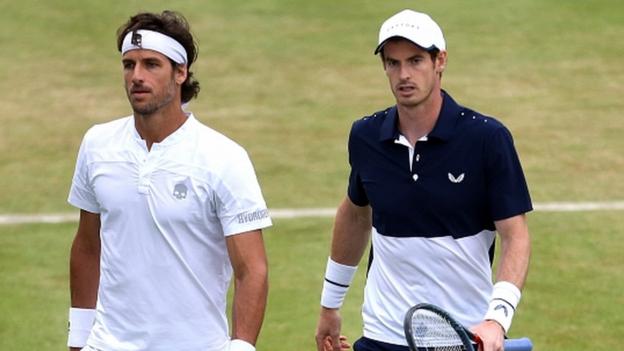 Andy Murray will return on Saturday to complete his quarter-final double at the Queen's Club, after his second comeback match has been suspended because of low light.

Murray and Spaniard Feliciano Lopez led the British pair Dan Evans and Ken Skupski by 6-4 and 4-5, when they were eliminated at 20:50 BST.

The two-time Wimbledon champion, 32, is making his comeback in London five months after a hip surgery that threatened his career.

The match will be resumed after the singles semifinals, which start at 13:00 BST.

If Murray wins, the semi-final will be played shortly afterwards, but he will not face his big brother after Jamie Murray and his compatriot Neal Skupski lost their last match 7-5 and 7-6 (8-6). Henri Kontinen and John Peers.

Lopez, 37, faces the possibility of three consecutive matches – he faces Canada's Felix Auger-Aliassime in the second semifinal of singles at the Fever-Tree Championships.

But there is only a maximum of three games and a potential tie-break yet to play in the quarter-finals.

Murray and his partner Lopez had to wait until 19:40 BST to reach a central block still crowded on the longest day of the year.

They were quickly on their pace with the Scotsman showing no negative effect from their first return match on Thursday.

The three-times Grand Slam champion, who is scheduled to play in the doubles at Eastbourne next week and then at Wimbledon the following week, moved a lot as he sought to build the match before a possible return to the singles later this year.

The duo secured the first service break in the seventh game and Murray, the former world number one, followed with a simple service.

With Lopez's serve in his left hand, causing trouble to his opponents, the Spaniard quickly tied the first set in the 29th minute.

Evans and Skupski – who, like Murray and Lopez, are another partnership – cherished the challenge in the second set.

After Murray was warned by a breach in time, Evans broke the serve of his compatriot with a superb forehand passing the line to open a 3-1 lead.

But with Murray producing some brilliant returns and an excellent lob, the British-Spanish team took the chance to break Evans' serve.

However, after a discussion between the players, there was no more game and they left the court.