Motherhood makes women more comfortable with the body and happier with the size and shape of the breasts.

By Connor Boyd For Mailonline

Becoming a mother makes women more comfortable with their bodies, according to a new study.

Researchers found that in general, women who were dissatisfied with the size and shape of their breasts had a more negative overall body image.

But after having a child, they tended to be happier with the size of the cup, which in turn gave them a more positive view of the rest of their bodies.

New mothers may focus on thinking of their breasts as something useful for feeding their children, rather than obsessing over their appearance, scientists have suggested.

And they added that pregnancy often brought a welcome-sized benefit – with some women getting a boost the extra cup size they earned. 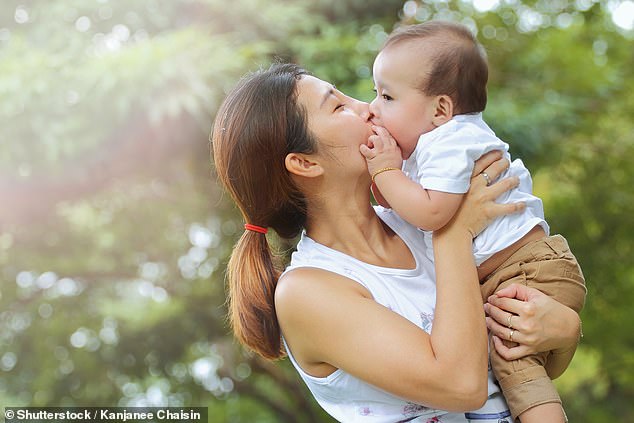 Motherhood makes women more comfortable with the size and shape of their breasts and is more positive about their bodies, according to a new study (image)

The study by Anglia Ruskin University and Sapienza University in Rome examined 484 women in Italy, half of whom were mothers.

He discovered a "significant" link between perfectionism – which contributes to negative body image – and dissatisfaction with breasts.

But the researchers said that this occurred only in non-mothers. They claim the findings I suggest that parents feel more comfortable with their bodies.

The study was conducted by Professor Viren Swami, an expert in social psychology at Anglia Ruskin.

Of the non-mothers surveyed, more than two-thirds (69 percent) reported dissatisfaction with breast size – with 44 percent of them wanting larger breasts.

Professor Swami said that perfectionist self-presentation – the desire to create an image of perfection in the eyes of other people – is known to contribute to a negative body image.

He discovered that dissatisfaction with breast size was associated with higher levels of two of the three factors behind that desire – concealing imperfections and promoting oneself.

But the association was not found among the 54% of women surveyed who were mothers.

Swami said that this was particularly the case with women who had more than one child.

He said: & # 39; There are a number of possible reasons why the association between perfectionist self-presentation and breast size dissatisfaction was significant only among non-mothers.

There is the fact that becoming a mother naturally results in changes in the appearance of the breasts, particularly in terms of size.

"But perhaps the most important thing is that becoming a mother – and particularly the breastfeeding experience – can focus women's attention on breast function rather than concentrating on the aesthetics of the breasts and the body."

The results are published in Body Image magazine.

New mothers who breastfeed their babies are less likely to have postpartum depression, new research suggests.

Pregnant mothers who plan to breastfeed after giving birth, but are unable to be at greater risk of developing the disease, experts have discovered.

About 13 percent of new mothers suffer from postpartum depression at 14 weeks postpartum.

In addition to causing serious mental health problems for the mother, it can also have significant effects on the cognitive, social and physical development of the newborn, the researchers said.

They said that the effect that breastfeeding has on postpartum depression is not well understood and aims to investigate whether there is a link between the two.

The authors, from the UK and Spain, surveyed women who had nearly 14,000 babies in the Bristol area during the 1990s, when their children were two, eight, 21 and 32 months old.

They also examined whether or not women suffered depression during pregnancy so that they could take into account the preconditions for mental health.

Their study, published in the journal Maternal and Child Health, found that mothers who planned to breastfeed and who actually breastfeed were about 50 percent less depressed than unplanned and non-breastfeeding mothers. .

Those who planned to breastfeed but were not breastfed were twice as likely to be depressed than unplanned and non-breastfeeding mothers, they found.