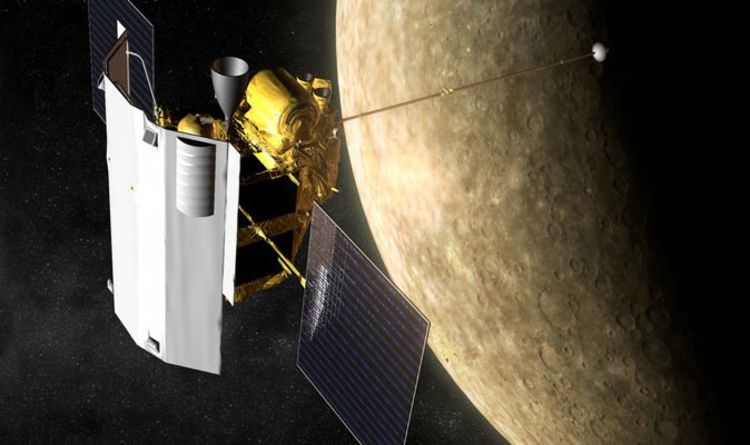 Mercury is the smallest planet in the Solar System and closest to the Sun. Like Venus, it follows a path around the Sun in the same orbit of Earth and is trapped in a 3: 2 spin-orbit resonance, making observation with a telescope much more difficult. As a result, NASA launched its MESSENGER probe in 2004 to take a closer look at the surface.

However, it was revealed during the BBC's new program "The Planets" of the BBC as the space agency achieved more than planned.

The physics professor said last month: "MESSENGER was able to do much more than just take pictures of the surface of Mercury.

"By tracing the radio signals emitted by the spacecraft, we can see very small changes in the orbital path around Mercury seen from Earth.

"This allows us to map the gravitational field of Mercury.

"There are also instruments that allow us to see how the planet sways by rotating on its axis.

"Placing all these measurements together allows us to do a cross-section of the planet to see what is done.

"When we do this, we find something very strange – Mercury's core extends about 85% from the center of the planet to the surface – it's as if the rocks on the surface are destroyed."

However, the finding was far from being the most remarkable.

Dr. Cox also revealed how they made a seemingly "impossible" discovery on the surface.

He added: "There's more – the tiny probe began detecting chemical elements in concentrations that no one thought possible so close to the sun.

"The discovery of relatively large concentrations of elements such as sulfur and potassium on the surface of Mercury was a great surprise.

"If you remember the time when the planets were forming, you do not expect high concentrations of these elements near the Sun where Mercury orbits today because they are so-called volatile elements and evaporate easily.

"So you only find high concentrations farther into the coldest reaches of the Solar System.

"So Mercury is an enigma and discoveries like these force us to completely rethink our theories about the formation of the planet."

During the same show, Dr. Cox also revealed how NASA discovered "rivers flowing" on the surface of Venus.

He said, "At the time when life was about to begin on Earth, it was three and a half to four billion years ago, the Sun was weaker and that means that Venus was cooler.

"In fact, the temperatures on Venus at that time would have been like a pleasant spring day here on Earth.

"Within a few million years of its formation, the surface of Venus had cooled and the planet was at the right distance from the weak young Sun to Venus to experience a familiar sight for us here on Earth.

"The heavens opened and great torrents flooded the surface, rivers of water flowed and Venus became an oceanic world.

"The planet's atmosphere allowed it to cling to the oceans by acting like a blanket, keeping the surface tempered thanks to the greenhouse effect."