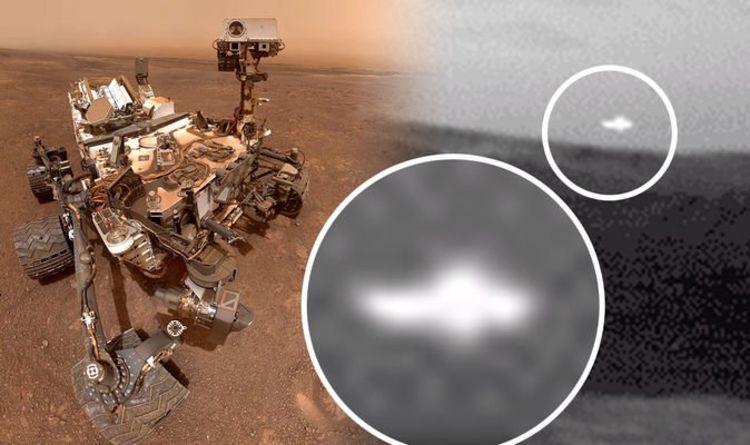 Curiosity is NASA's spacecraft that has explored the Gale on Mars crater since 2012. The vehicle's comprehensive mission includes investigating the brutal weather and geology of Mars and assessing whether basic life has thrived on Mars. And UFO conspiracy theorists now believe NASA's Mars Curiosity rover has come across its biggest discovery after an anomaly was clearly seen in a photo.

The black and white photograph of Curiosity shows the desert landscape with high rocky hills in the background.

In front of the larger rock formations, a seemingly high white spot is clearly evident.

The photograph, which is dated June 16, sparked the expected frenzy among alien life conspiracy theorists, who hastened to state that it is conclusive evidence of alien life on Mars.

However, the reality of the anomaly is in fact much more prosaic.

It is almost certain that a cosmic ray, a camera lens reflex or simply the reflected sunlight on the rocks has been responsible.

Cosmic rays are made up of highly charged atomic particles, usually from outside our own solar system, that travel through space almost at the speed of light and can produce visual effects on impact.

Cosmic rays are more common on Mars than on Earth due to the thin atmosphere of the Red Planet, which does not provide an effective barrier against cosmic radiation.

And this is not the first time NASA's iconic Mars Rover captures anomalies on the Red Planet.

When another bright spot captured in photos taken by the rover was headlined in 2014, people claimed that it was "light from an alien hut."

The rover has two "navcams" mounted on its mast, which function as a stereo pair of cameras.

The black and white images capture panoramic 3D images and each has a 45-degree field of view, giving NASA engineers on Earth a detailed view of the planet's terrain.

The image in question was taken by the right navcam.

Unfortunately, the left camera was not looking in the same direction, and photos of the same scene and time showed that it turned to take a space selfie, showing parts of the ship on stones and dust on the ground.

The appearance and disappearance of the unidentified white spot must have been rapid, since the photos taken immediately before and after do not show the same unidentified phenomenon.

Justin Maki, a team leader at NASA who designed and operates the Curiosity camera, was not impressed by the Mars Curiosity Rover conspiracy theory.

He said: "In the thousands of images we get from Curiosity, we see those with bright spots almost every week.

"This can be caused by impacts from cosmic rays or the sunlight shining on rocky surfaces, like the most likely explanations."