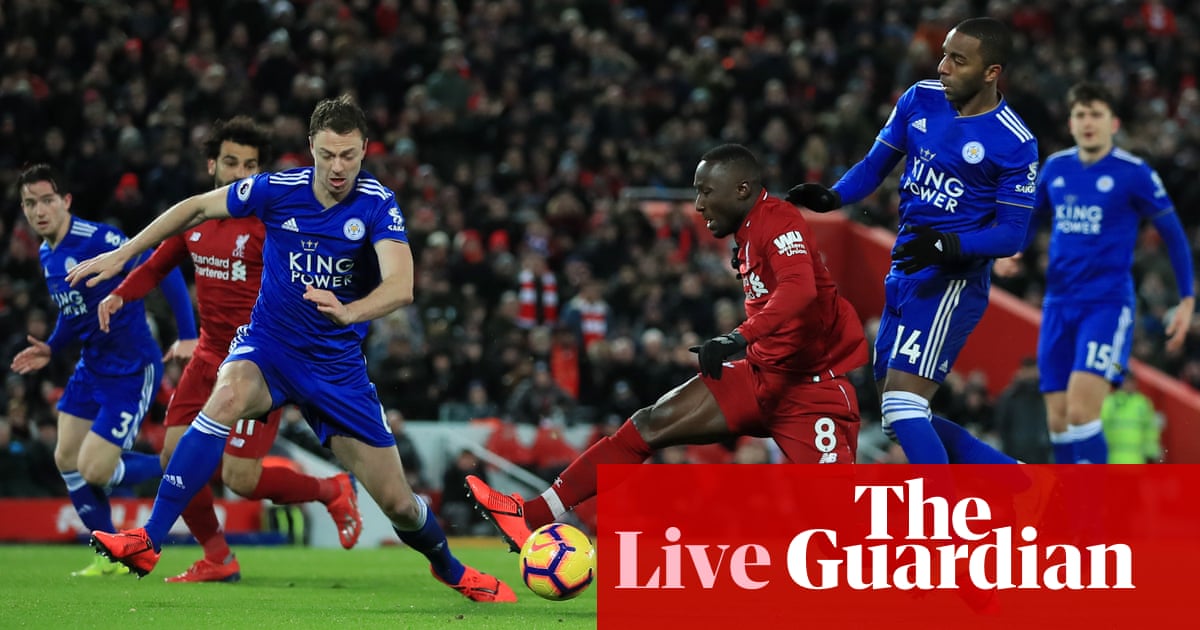 90 min + 4: Mane directs the song of Lallana. That should be it. Chilwell is reserved for the presentation of time.

90 min + 3: The Robertson Cross, the authorization of Chilwell. About. Liverpool win another corner, though.

90 min + 1: We'll have four minutes of downtime. Liverpool is accelerating. Lallana breaks right, reaching for the signing, but Evans clears his cut.

87 min: Mane speeds through the middle and looks ready to shoot the edge of the area, only to Choudhury to deny him with a great tackle. The ball runs to Sturridge, who finds Row Z.

86 min: Momentarily, Sturridge seems to have a free sprint in the Leicester defense, with Salah free to the left, but he uncontrollably manages to catch the ball.

82 min: Salah knocks the free kick off the wall. The ball is raised to Mane, who is incorrectly stopped. This is the tip for Liverpool to replace Firmino with Daniel Sturridge.

81 min: Ricardo equalizes Salah to the left of D. A foolish foul gives Liverpool a free kick in a promising position. A silence falls on Anfield. Salah likes that.

79 min: Liverpool is very short on ideas. Wait until they play West Ham on Monday. They do not know what to do against the Pellegrini catenaccio.

74 min: Henderson throws a cross in the middle, the ball flying to Firmino on the left. The striker works in space for a kick with clean footwork, but Schmeichel defends his sharp effort. Liverpool settle for a corner.

73 min: Leicester breaks a free from Liverpool, Vardy hastening with Gray to his left. Vardy plays Gray, but the striker shoots too early and Alisson makes an easy save. He could have slipped to the unidentified Maddison, who was in a better position.

70 min: This half pulled away a little. Liverpool is not threatening much. Leicester's tactics have been well done so far.

65 min: The resulting free of Keita is a waste of time.

64 min: Firmino leads Maddison's singing away. The ball is thrown back into the area, but Vardy's impediment. Moments later, Chilwell cuts Wijnaldum.

63 min: Gray wins a corner for Leicester on the left. They really want a second.

60 min: Vardy tries to reach a long ball on top, but it is very difficult for him to control.

57 min: Keita, who did not do much tonight, suddenly shakes, advancing, doing a nice double with Firmino and invading the area. However, it takes an age to settle his feet and gasp wide as he descends under Ricardo's pressure. Liverpool shouts at a penalty, but Martin Atkinson sends his calls away. Ricardo stood on Keita's left foot.

52 min: Ricardo wins a free Keita on the right. Maddison sends a deep delivery to the furthest outpost, where Maguire pulled away again. The flag sits down, Maguire heads down into the six-yard box and Firmino almost turns the ball into his own net, just for Alisson to make a wonderful pointblank save! The ball loosens up and Liverpool somehow makes it clear.

50 min: Leicester is trying to play with the tension at Anfield. And, more than anything, attack by the left. Chilwell runs a very strange race, jumping into the area, reaching the front line, then turning around and doing a 360-degree turn. It seems the moment has passed. Instead Chilwell amazes everyone with a cunning pass inside Maddison. The angle is tight and although he only has Alisson to hit, Maddison tries to push the ball into the middle. Is leaving.

46 min: The second half begins. Groundstaff cleared a snow penalty area. You will not be surprised to know that is the end that Liverpool is attacking. How sporty of them.

Peep! Peep! Liverpool had an early lead thanks to Sadio Mane but was eliminated by Harry Maguire. Liverpool are five points ahead of Manchester City, but they have a lot of work to do. They are not convinced.

This is such a soft goal. Maddison's free is not unmarked properly. The ball drops to Ndidi, who sees his shot blocked. The ball loops for Chilwell, who directs her back into the area. Some Leicester players are disabled. Not Maguire, however. Matip drops the ball over his head, allowing Maguire to steal and pass Alisson to give Leicester a well-deserved draw and Manchester City a big boost!

45 min + 1: Robertson knocks Ricardo to the right. One more chance for Leicester.

41 min: Robertson makes a glorious pass to Mane, who is cut off by Maguire in the middle of Leicester. Mane would have passed the goal, but Maguire only receives a reserve despite being the last man.

38 min: Salah runs to Maguire in the area and falls. He grabs his face. Nothing doing.

36 min: Mane injects some urgency into Liverpool's attack with a blast in the middle. He hands it over to Salah, who tries to fold one in the far corner. Chilwell deflects the shot with one leg stretched. Liverpool fans shout for handball.