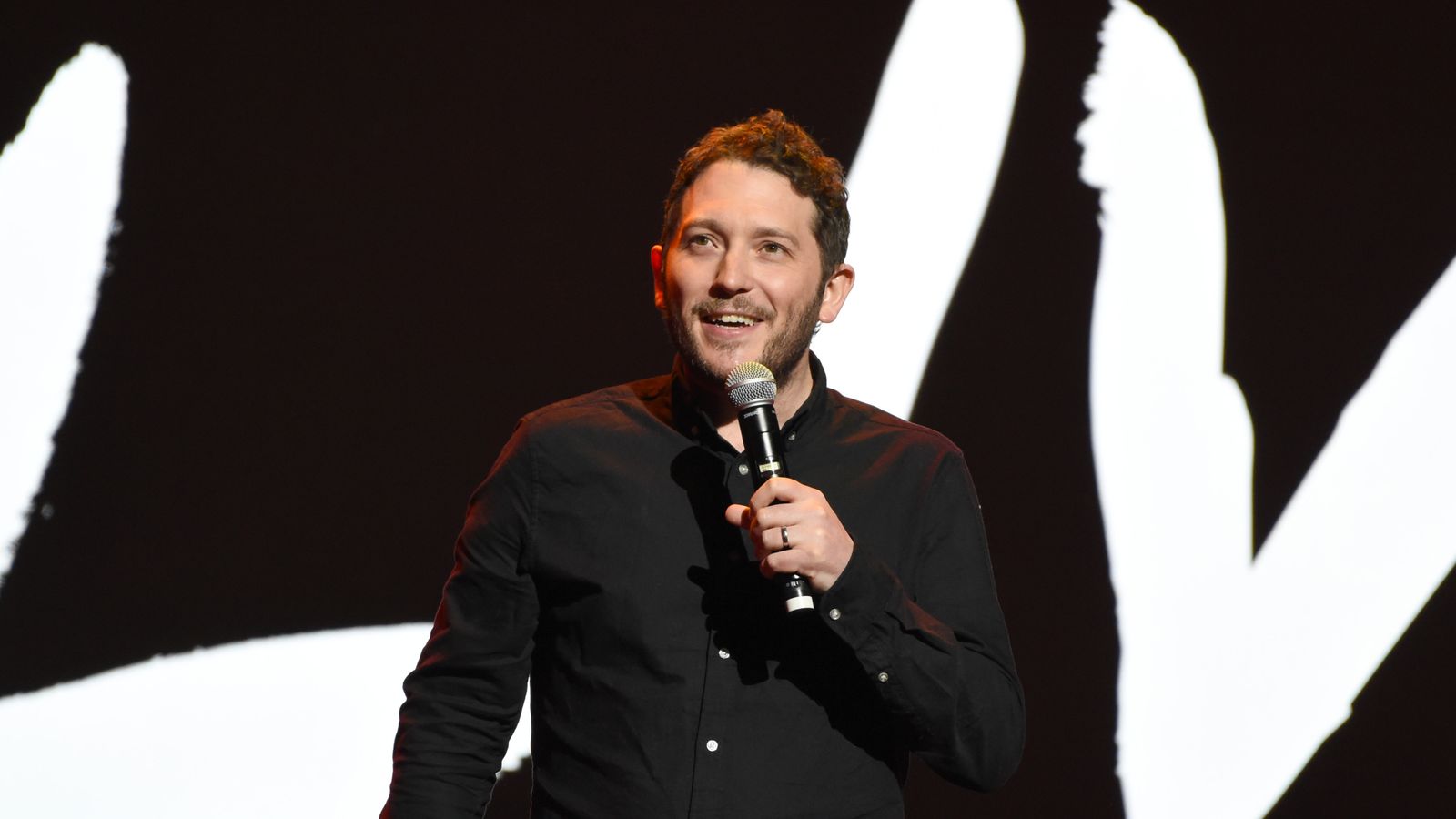 Like any new father, comedian Jon Richardson has found a lot of things to worry about.

But when worrying, or being funny about worrying, is how you make a living, at least the stress can hopefully provide some good material for his next tour.

"It's shifted my worrying, which is a main part of my act, on now worrying for my daughter and her generation," he tells Sky News.

"I'm hoping the next tour will have a bit more of a global view in the sense of worrying about what life's going to be like for her generation because my view has been very narrow up to this point."

"You're allowed to be selfish up to your 30s. It's probably time to diversify a little bit," the 36-year-old added.

Richardson, star of 8 Out Of 10 "I do not think I'm a comedian on that show, I'm a nerd living out his teenage fantasies" – and Ultimate Worrier on Dave, is married to fellow comedian Lucy Beaumont, but jokes that the laughter levels have dropped something now they have added a baby to the mix.

"With a two-year-old at home the level of comedy around the house has dipped," he says. "There's a lot more testy arguments over the balcony at 3am than there's witty banter over the dinner table."

The pair are working on something together at the minute – which will either end in a TV project or divorce, he says.

One of comedy's most famous pessimists, Richardson felt for a long time that domestic bliss was perhaps out of his reach.

"It sort of empowered me almost to control a lot of the things that were stressing me out at the time, and to see the severity of a disease that certainly in comedy is used far too much as a cover-all for people who like things neat and tidy or do not like to be late, which are perfectly normal, sensitive character traits, "he says.

"That's the time I started to calm down a little bit and probably led me to be able to hold down a relationship and have a child and all the things that have made my life better now.

"It started then by realizing that what I had was more quirks of personality than I could exploit without feeling like I was mocking people with a serious disorder."

In his last tour, Old Man Live, Richardson tackled everything from haircuts and social media, to weddings and pregnancy, as well as the old problem of the correct way to load a dishwasher. These are issues that trouble him.

Does he ever worry that he'll run out of things to worry about?

"I think in the current climate that's unlikely," he says. "I think with two-year-old daughter in the current political climate I'm safe for a while while yet of worrying."

Politics itself, however, is something Richardson tends to steer clear of.

"You can not move people by their opinions, on street corners and on the news on TV, so I think to say to people, 'If you come and see me I'll just try and make you laugh for two hours and you will not be judged on any of your opinions. '

"I'm starting to think I'm probably not the one who's going to sort of out of this stuff." In my twenties I did not think much more and a lot more judgment of the political scenario. I do not know what I'm talking about, and if there is a solution, I'm probably not.

"Even in the current climate where things are awful, most people's day-to-day is driven by the sort of stuff I'm talking about," he says.

"Whether your partner's loaded the dishwasher properly, whether the people next to you on the train have behaved in the way you are appropriate – those are actually the things that you are going to be in bad mood … so I'm gonna leave my two penneth out. "

:: Jon Richardson: Old Man Live is out on DVD and available on digital download now.