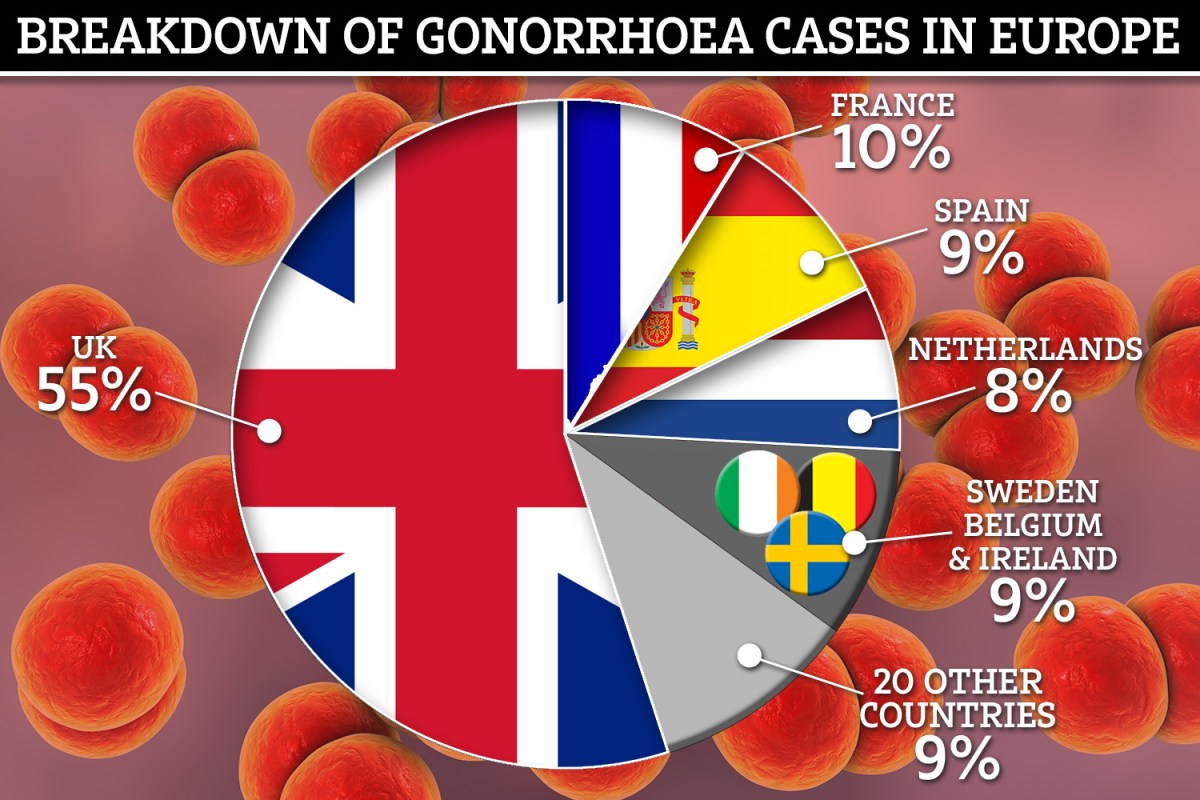 Experts warn that gonorrhea is increasing, as Britain accounts for more than half of all cases in Europe.

The number of people with sexually transmitted infections rose 17% across Europe in 2017 – with 240 new cases diagnosed every day.

There follows a decline in cases from the previous year, according to the latest data from the European Center for Disease Prevention and Control (ECDC).

It is also five times more than France, ranked second, with 9,177 registered diagnoses of gonorrhea, despite having the same population as the United Kingdom.

Gonorrhea – also known as "the clap" – is the second most common STI in the UK after chlamydia.

ECDC's Gianfranco Spiteri said: "One thing that the constant high rate of gonorrhea cases in Europe tells us is that people continue to have sex with new, casual partners without condoms.

"This facilitates the transmission of an increasingly resistant infection to common antibiotic treatment options."

The increase follows a general trend in the last decade, in which 20 of the 28 EU countries consistently reported an increase in gonorrhea cases.

Since 2008, France and Portugal have experienced a six-fold increase, while Denmark and Ireland now register more than three times more confirmed cases.

Some countries have seen year-on-year increases of over 40%, such as Finland and Sweden.

More than 44,500 Britons were diagnosed with the infection in 2017, while 78 million are globally infected each year, according to the World Health Organization.

Experts have found that men who have sex with men account for almost half the cases of gonorrhea in 2017.

They added that the increase in cases among women is "worrisome," since untreated gonorrhea can lead to pelvic inflammatory disease or cause infertility.

Spiteri added: "We have to keep in mind that the numbers we see do not even show the true extent of the epidemic of gonorrhea in Europe.

"Many infections are not diagnosed due to lack of symptoms or limited access to diagnoses or are simply not reported.

"If you are at risk, make sure you take the test regularly."

What are the signs of gonorrhea?

According to the NHS, bacteria that cause gonorrhea can sometimes infect the throat and eyes, as well as the more common sites of the cervix, urethra and rectum.

Pregnant women can transmit the infection to the baby, which can cause blindness if not treated on time.

Signs of a gonorrhea infection can vary between men and women.

In women, symptoms may often include vaginal discharge that is abnormally watery or light colored, as well as burning pain when urinating.

Less common symptoms in women include pain in the large intestine and bleeding between periods or after sex.

Two Brits got super gonorrhea & # 39; after sex sessions in Ibiza

TRUE reliability of contraception revealed: 82% for condoms, 91% for the pill

Super gonorrhea is the beginning of the drug-resistant STI boom, This Morning doc warns

WHO TO GIVE STONES

There was a young woman named LYDIA …

More People Get Chlamydia Than Flu in Limerick

Shigella can be caught during sex – leaving you with unpleasant diarrhea, expert alert

In men, symptoms may include unusual discharge from the penis, burning after urination, swelling of the foreskin, and, in rare cases, pain in the testicles.

It usually takes a few weeks from the infection for the symptoms to appear – although it may take a few more months in some cases.

However, about a tenth of men and half of women have the disease without any symptoms, which may mean that it goes longer without being treated.

Super gonorrhea spreading through the UK