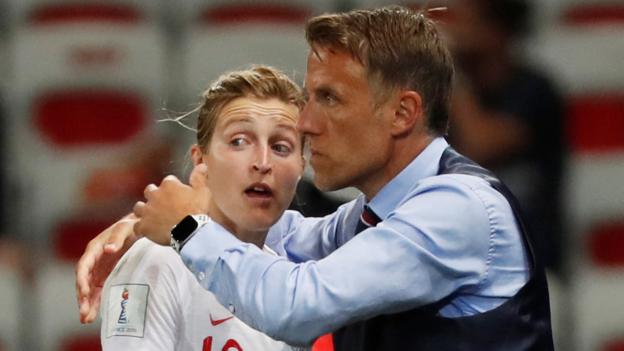 England suffered strong pressure at Nice but two Ellen White goals and a few defenses were enough to reach the last 16.

Despite another pass in the second half, Neville maintains his style of counterattack, with which he wants to persevere.

"Style is not negotiable, no matter how far we go," he said.

"When you reach age 16, it's about winning. We put a great emphasis on winning, since we like to play in a certain style."

In the second half [against Japan]because we were so open and weary, we probably got a little exposed.

"But we got another clean chip, we won another game and we played three and we won three.

"We are where we want to be – in the last 16, ready to attack the end of the tournament.

After White opened the scoring with a clever finish over Ayaka Yamashita, Japan entered the game, with England happy to sit and absorb the pressure.

And while their four players were able to repel most of the Japanese threat, there were times when Karen Bardsley came to the forefront, making a particularly impressive defense to stop Kumi Yokoyama from deflecting a 35-yard free.

Further down the field, Bardley's colleague at Manchester City, Georgia Stanway, impressed in her first match at the World Cup, and it was the 20-year-old who opened the scoring for White.

"Bardsley was great," Neville said. "I think she was our player in the game today.

"You talk about the best guardians in the world, and we've seen some brilliant in this competition, she's up there in the top three places for me."

He added in Stanway: "She's amazing. When we named the team, she seemed a little surprised and nervous, so we said that you're in the park, playing with your friends.

"She will be one of the best players in world football if she keeps her feet on the ground, keep working hard and keep listening to the coaches."

Eyebrows were raised when Neville made big changes in his opening XI for the second straight game – sending one side with eight different faces of the team that beat Argentina on Friday.

And England might not have been fluent at times, with Toni Duggan and Demi Stokes, who made their first appearances in the tournament, struggling to get into the game.

But Neville is determined that turning his team is the best way forward, saying, "We have chosen our strongest team to play against Japan.

"It's about what spins, not about putting 23 players in a hat and picking 11 – we strategically plan every spin and made eight today.

"We knew that sometimes we would suffer, but it was a game we needed to stay focused."