Home / unitedkingdom / Eddie Jones: Scotland Must Be the Best Small Team of the world

Eddie Jones: Scotland Must Be the Best Small Team of the world 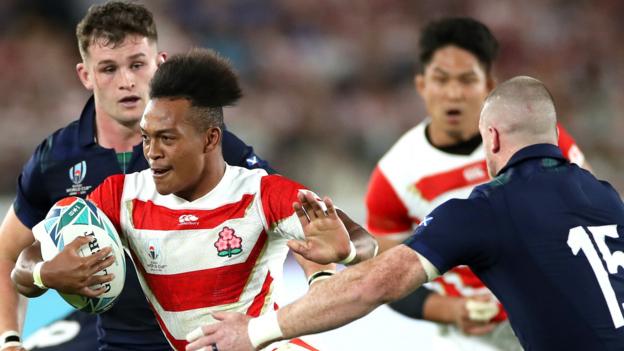 Scotland should be inspired by Japan and try to become "the best" small "team in the world," says England coach Eddie Jones.

Jones also suggested that Gregor Townsend's team "missed their fitness" because they couldn't get out of the pool at the World Cup.

Japan's hosts have eliminated Scotland on their way to the last eight, where they lost to eventual winners in South Africa.

"Gregor got them back to playing the way a Scottish team should play," Jones said.

"[A lack of size] makes it difficult, but you can have a unique success like Japan.

"You need to pool all your resources to be the best small team in the world.

"That means you look at everything you do, how quickly you can win the ball – especially the set ball.

"You see how you can win the ball quickly after the breakdown and you need a consistent program for four years to be at your best to do so.

"You have to play fast, you have to have a varied attack and it takes a lot of cohesion to play that way."

Jones, 59, coached Japan for three years, including leading the 2015 World Cup, where he lost to Scotland as he became the first country to record three group stage victories and miss the last eight.

He then took command of England, winning the Six Nations in 2016 and 2017 before finishing as South Africa's runner-up in Japan in early November.

His team produced a colossal performance to upset New Zealand in the semi-finals, but lost a week later against the powerful Springboks.

Too much race before the World Cup?

The Scottish tournament was a big disappointment, not reaching the last eight for the second time after defeats to Ireland and Japan.

Jones's remarks about team conditioning are at odds with Townsend's claim that his team would be "the fittest in the World Cup."

"We have great respect for the Scottish team and the way they play," said Jones. "Scotland is the smallest country with smaller resources that need to fight more.

"I see a very loose team that wants to finish the game, which depends a lot on number 10 [Finn Russell] for inspiration.

"Where they were beaten at the World Cup, it is possible that they have misfired their fitness."

"The first game before the World Cup [a 32-3 warm-up loss in France] provides a good indication of where a team will be. They seemed to have crossed the line, but this is a far-off judgment. "

While Jones thinks the Six Nations are "probably the right size," he would like Japan to try the action after his World Cup heroics.

"I think 10 internationals a year in the northern hemisphere are right," Jones said. "Raising the Six Nations would mean moving away from elsewhere.

"I would bring Japan in for weeks so they could play two games in the next three or four years to prove that they are strong enough to compete consistently."