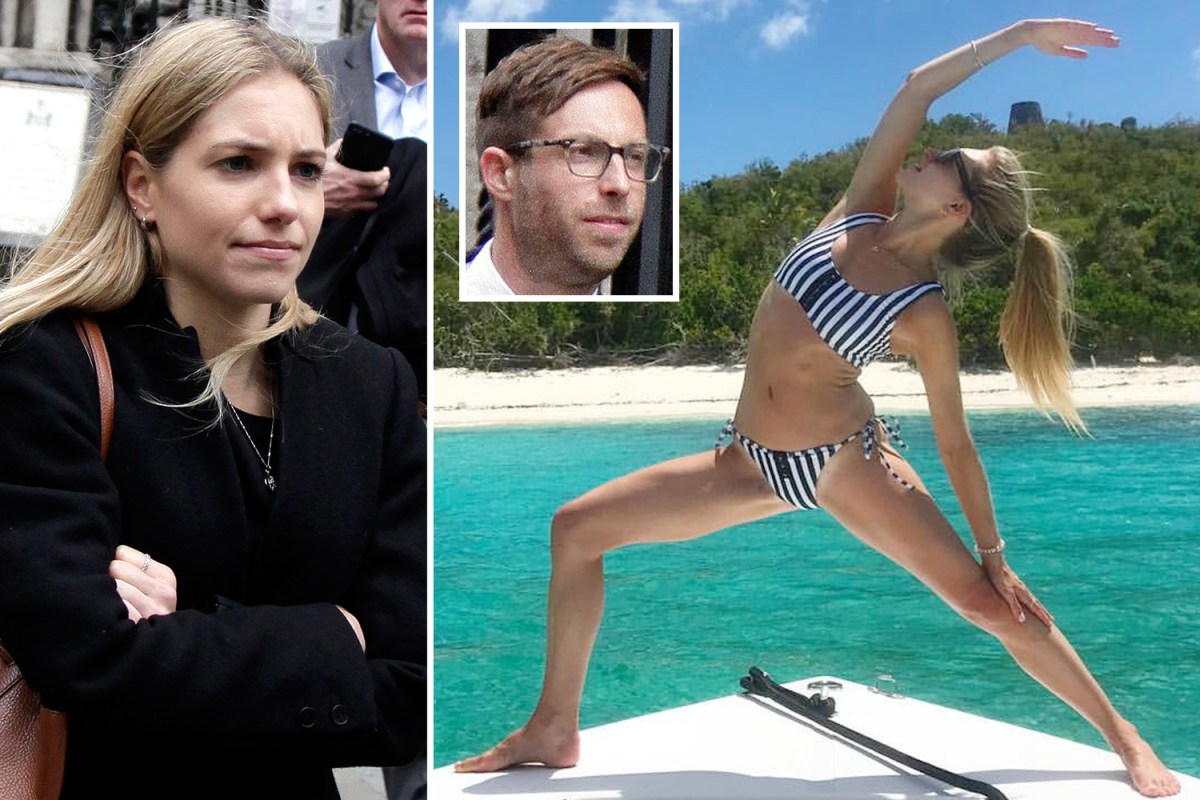 A cyclist who fell on a yoga teacher after she stepped on the road while looking at her phone was today ordered to pay up to £ 100,000 in damages and court costs.

Gemma Brushett, 28, was unconscious after being hit by Robert Hazeldean on a busy crossing as he returned home from central London in 2015.

Ms Brushett sued the sharp rider and was awarded a payout, despite Judge Shanti Mauger finding out she was equally guilty of the accident, and could have been sued by the cyclist.

At the county court in London today, Judge Mauger awarded her £ 4,161.78 compensation after saying that the 8-mm scar she suffered on her lip did not detract from her "very attractive" appearance.

The judge also ordered Mr. Hazeldean to pay his legal bills, considered in the region of £ 100,000, because he was not insured at the time of the accident.

The landscaper, who has since moved to the Côte d'Azur in France to start a new life, said he was "deeply disappointed" with the decision and could be "bankrupt".

He said: "Today finally comes to an end four years that have had a great impact on my mental health.

"Of course I'm deeply disappointed by the result, recovering from the impact it will have on my life and worried about the precedent he can set for other cyclists.

"I am more grateful than I can say for the support of my wonderful girlfriend and my friends and family. I would not have been able to get through this without them. "

He also criticized the "claim culture" as he called for reform of the legal system.

Lawyers acting on her behalf revealed that, because she had no insurance, Mrs. Brushett requested almost £ 100,000 in costs.

He added: "The case cast a shadow over our new life in France and left our future uncertain.

"Covering the costs and the compensation will leave me bankrupt.

"I can only hope that the focus in this case will highlight the vulnerability of cyclists, both physically and against the courts, and that this may help reform a legal system that seems to leave certain road users disproportionately exposed.

"If I had legal representation at the time of preparing my defense, I would have taken such steps to protect myself.

"I would recommend other cyclists to take out insurance through the British Cycling to help protect them from experiencing what I've been through."

The court heard that Ms. Brushett, who works for a finance firm in the city, as well as doing yoga retreats, was part of a "crowd" of people trying to cross the street early in the rush hour when the accident occurred.

She was looking at her cell phone as she crossed the street from east to west and only noticed Mr. Hazeldean approaching at the last moment.

She "panicked" and tried to dodge back to a traffic island, but the cyclist, who was traveling at a speed between 10-15 mph, swerved in the same direction and hit her.

Despite drivers, cyclists do not need insurance to be on the road.

Some take out an insurance policy if they are involved in a collision, but if they find someone else, it can be expensive.

If a cyclist hits a pedestrian who was not looking where he was going, a judge usually reiterates that both are equally guilty – meaning that they are liable to pay their own extortionate legal costs.

The pilot may also have to pay a pedestrian indemnity, which can add thousands of pounds to his account.

If a cyclist is insured, they are protected from monster legal accounts by the insurance company if someone states that they are missing in an accident.

Mr. Hazeldean had passed a green traffic light, and there had been a compressed air horn attached to his specialized bicycle, as well as shouting, deflecting and braking to avoid the pedestrian.

Both Ms. Brushett and Mr. Hazeldean were knocked out by the impact, with Miss. Brushett suffering from cuts, cracked teeth and post-traumatic amnesia.

Judge Mauger said that Hazeldean was "a calm and reasonable user."

But he ruled that he should pay compensation because "cyclists must be prepared at all times to behave in unexpected ways."

Although Ms. Brushett was "looking at his cell phone" as he entered the street ahead of him, Hazeldean knew the road was not entirely clear when he tried to pass.

Up to 130 people were seriously injured in cycling accidents last year and four were killed on the roads of Britain.

And more than ten pedestrians suffer fatal injuries every month when they are hit by people on bicycles.

As a result, the government is looking for ways to make roads safer for pedestrians and are urgently examining whether new laws should be introduced to cover dangerous cyclists.

Current Victorian legislation was originally used to deal with reckless handling of horses, but there is no cycling equivalent to the crime of causing death by dangerous driving.

Riding a bicycle without proper care and attention or reasonable consideration by other road users implies a maximum fine of £ 1,000, while the dangerous bicycle may carry someone with a £ 2,500 fine.

But causing injuries cycling furiously has a maximum sentence of two years and falls under the legislation of 1861.

Pedestrians have a duty to take care of their own safety and civil law, but even if they enter the road without looking first and get in the way of an approaching car, the pedestrian may still consider a claim of compensation against the driver.

A driver may claim pedestrian compensation in respect of vehicle damages or other injuries or losses that the driver suffers, but they rarely win.

Emma Farrell, head of the Personal Injury team at Levi Solicitors, said Hazeldean's costs would be limited to £ 6,000 if he was insured.

She explained, "If he had come to us earlier, we would have advised him to enter a counterclaim, since he had permanent scars, both physically and mentally.

"He would then have protection under the law against a large cost order."

A company spokesman added: "We believe the law in this area urgently needs reform."

On Twitter, she said: "The courts not only failed Robert today, but they set a dangerous precedent for cyclists across the country."

The case is the latest to issue bicyclist issues on the road with 20-year-old cyclist Charlie Alliston, who has been jailed for 18 months for knocking down and killing a woman as she crosses East London.

Brit Wrestler, 36, "took her own life" months after trying to save a burning girl

Carer caught the camera abusing a patient with dementia of 101 years, imprisoned for 8 months

Kim Briggs, 44, was crossing the street when she was struck by Alliston's bike, which had no brakes, and her husband now calls for a "radical change" in cycling culture.

He said: "It is worth remembering that serious pedestrian injuries from collisions involving cyclists are rare and that the cyclist can also be seriously injured when they also occur.

"From media reports, it seems strange that the judge attributed the responsibility on a 50/50 basis, given his own comments reported on the case.

"However, this case highlights why Cycling UK offers all our associates third-party insurance, and recommends that regular cyclists adopt similar policies to protect them from this type of situation."