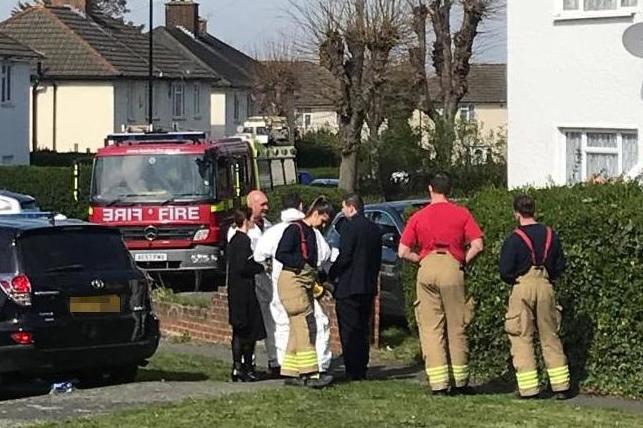 A 13-year-old boy is struggling for life and several others were injured after a fire at a family home in Croydon.

Witnesses described how members of the public tried desperately to rescue the young man as black smoke rose from the windows of the house in Thornton Heath.

Police said two people, a 30-year-old man and a 20-year-old woman, were injured trying to help the boy when the blaze came on Monday night.

They were taken to the hospital with laceration wounds and suffering from smoke inhalation.

A neighbor on the side said the boy's father and two passing merchants tried desperately to rescue the teenager from the first-floor window.

Val Dewson, 76, who lives in the house next door, said: "It was awful … I heard this all-powerful fight, I thought someone was fighting outside.

"You could see all the black smoke in the two windows of the room. It all happened so fast, I kept thinking "let's go" about the fire brigade.

"There was a van out there with two stairs, two guys came and put the stairs up, but they could not break the window, so someone took a brick from my garden and broke the glass. It was just pandemonium.

"You just do what you can, you feel a bit powerless to look at those guys trying to break the glass."

Ms Dewson said that after firefighters wearing rescued breathing apparatus the boy's doctors treated him in the garden "for a good while."

"When the smoke came out the window, it turned black, but it also seemed to have a yellowish color," she said.

She said the family, two boys and their parents had lived in the house for about a year.


"They are just kind and kind people. The children were friendly, it was very rare to hear them. They did not deserve this. It kept me awake all night. "

Another neighbor said, "I heard screams and shouts, but I thought they were kids playing. Then it was loudly screaming and crying.

"I went into the back garden and saw the big flames in the window on the first floor. They were treating everyone outside.

About 25 firefighters and four bombs were dispatched to fight the fire at Camden Gardens after it tore the townhouse shortly after 5.30 pm.

One witness said she "never saw an emergency response like this in my life."

Residents were forced to leave their homes before being allowed to return after the fire was under control at 7:45 pm.

The boy was taken to a hospital in south London suffering from smoke inhalation and remains in critical condition.

A man, about 50, suffered a minor tear and was treated on the spot by paramedics, police said.

Emergency services continued to investigate the cause of the fire this morning.

A police spokesman said: "The cause of the fire has not been established and an investigation is under way. At this early stage, there is no evidence to suggest that the incident is suspect.

"The officers of the Southern Area Command Unit investigate. There were no arrests. "