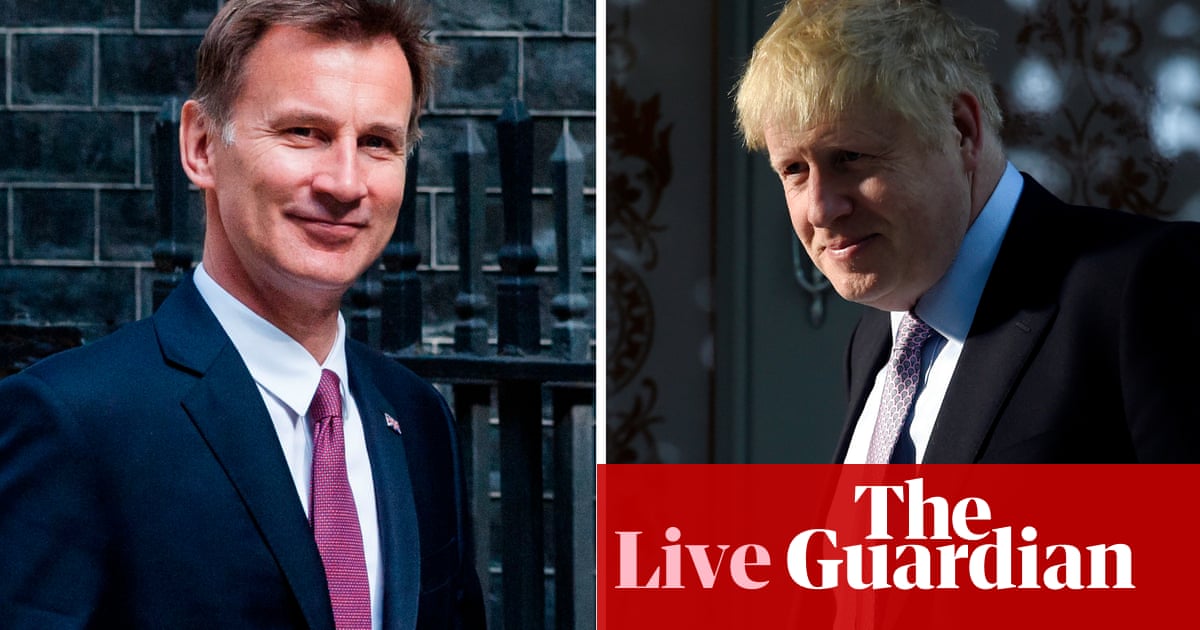 Conservatives say there were 20,000 applications for seats in the 16 members across the country. The president of the party, Brandon Lewis, said:


I would like to congratulate Jeremy Hunt and Boris Johnson for reaching the final phase of the leadership contest.

I am delighted with the strong interest in our hustings, showing the vitality of our party in all the nations and regions of the United Kingdom.

We are aware that the Conservatives are not only selecting a new leader but also the next prime minister, and we take that responsibility extremely seriously at such an important time for our nation.

Of course, that can be a moot point. Mark Francois told Sky News tonight that Johnson has promised the tough ERG in support of Brexit, of which François is vice president, that Brexit will happen October 31 "come to hell or high water" if he becomes prime minister.

The former Conservative leader, Iain Duncan Smithis supporting Boris Johnson, whom he describes as the man to "inspire and lead" the UK outside the EU.

Duncan Smith also said parliamentarians who support the stay should "stop bothering and moaning" and said that Johnson had been misunderstood in the BBC debate.


When Boris said it was eminently possible, he was talking about a trade deal. He said that at the beginning of the program, if we do not leave on October 31, we will face a cataclysm.

Duncan Smith undoubtedly has a point – and it's one he did in his post-debate twist. But he is not strictly right.

At first, Johnson did indeed say that the UK "should leave on October 31st." But when asked later by the host, Emily Maitlis, for an absolute guarantee that the UK would leave on October 31 under his administration, he said: "Michael [Gove] was making sure to leave by the end of December [2019]. I think 31 October is eminently feasible. "(Johnson was responding to a Gove question about [a] deal on the line "on or around that date or" ripping it "just to keep the calendar.)

He also spoke later about the importance of coming out with an agreement, saying no one wanted a "messy Brexit".

So it is – at best – debatable whether Johnson was not guaranteeing Brexit in any form on October 31, or just not ensuring that a negotiated settlement was made and polished by then.

However, what is less debatable is the accuracy of Duncan Smith's "trade agreement" comment. No such document is on the table for Johnson to refer to.

The portions to be determined before Brexit – and those that Theresa May I had so much trouble going through Parliament – it's the withdrawal agreement and the political declaration.

Generally speaking, these establish the terms of exit from the United Kingdom and the foundations on which a future trade agreement could be built. Neither is a "trade agreement" in the more common understanding of that term and no trade agreement would be agreed before Brexit.

The Labor Party had its opinion on the news that Boris Johnson and Jeremy Hunt they will face each other by conservative leadership – and the keys to number 10.

There is perhaps little surprise in the fact that Labor wants a general election. Andrew Gwynne, his national campaign coordinator, said:


Which choice: the man who broke the NHS or the man who wants to sell him to Donald Trump. A handful of non-representative conservative members should not choose our next prime minister. People must decide through a general election.

In April, in one of his regular Conservative Party polls, the ConservativeHome specifically asked how they would vote against a choice between Boris Johnson and Jeremy Hunt.

It's just a research, and this time there will be a campaign, hustings and debates, but this is probably a fair guide to what the party thinks at the moment. It shows the scale of the challenge faced by Hunt.

This is all from me to tonight.

Mel StrideGove's campaign manager said Gove's cocaine admission has hurt his bid for leadership. "It paralyzed us and meant that the moment was lost at that moment," he said.

Conor Burns, Bournemouth's deputy and a key member of Boris Johnson's team, rejected the idea that they had lent votes to Hunt to make sure he progressed. He said:


The message came from Boris: if people want to support me, they vote for me, do not fuck around. We wanted to progress at every stage. We wanted to go to the members, more than half of the party voting for Boris. This is a really strong mandate and message from our parliamentary colleagues to our members in the country – get on board and we will put it all together.

And here it is Jeremy Hunt praising the four final contestants (but not the others).