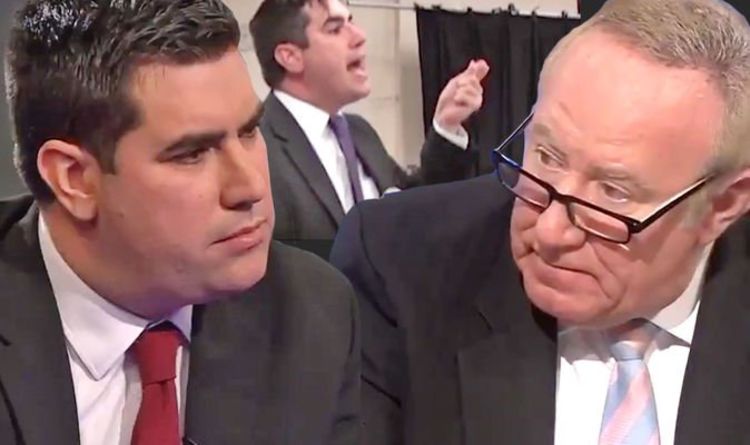 The Labor MP said it was a claim and that he "did not say that."

Neil said, "It's very important because you may be correcting the record here.

"What is important. Did not you say that?

Mr. Burgon replied, "No, and it is not my opinion.

"I believe that on certain occasions the Israeli government, like the governments of other countries, is an enemy of peace.

"We have to see this as a separate matter."

Mr. Neil continued to question the frontbencher Labor who insisted that he did not make the remarks.

But, in images unearthed by Iggy Ostanin, supposedly from 2014, Burgon says that "Zionism is the enemy of peace."

He said: "And the enemy of the Palestinian people, it is not the Jewish people.

"And I am everything so that the opinions of all are out there and everyone has their opinion treated with respect.

"But, look at the internet because it's there to see on the Israel Labor Friends website which deputies are members of Israeli Labor Friends. Which Labor MPs are officers of Israel's Working Friends.

"And to ask them, in support of the Palestinian people, in protest of what is happening in Gaza now, to resign from the Labor Friends of Israel, to show support for all of humanity."

Richard Burgon MP, Shadow Labor Justice Secretary, said: "When I was told in August 2016 that I made these remarks, I did not remember doing so and therefore asked for the complete quotes for myself and asked when and where I had said that.

"I did not receive a reply, so I thought it was inaccurate to have claimed that I had used that phrase. Now it is clear that I did and I regret doing it.

"As I have said on several occasions when questioned about this, I do not agree with that phrase. I recognize that such a phrase can not distinguish between those seeking a peaceful solution under international law and those, like the current Israeli government, who are undermining efforts towards peace.

"The terminology has different meanings for different people and the simplistic language used does not reflect how I now think about this complex issue and I would not use it again today. It is being reported that I made these remarks in 2014, which was before being elected as a parliamentarian.

"At the meeting, I criticized Benjamin Netanyahu's government and its aggressive expansionist policies. In the video, I made it explicitly clear that I was not talking about the Jewish people.

"As I believed and believed now, in discussing the issue of Israel and Palestine, you must clearly distinguish between the actions of a particular Israeli government and the Jewish people as a whole.

"I have always been in solidarity with the Palestinian people and in opposition to illegal occupation and discrimination, and I will continue to do so in the search for a peaceful solution to decades of conflict.

"It is essential that the labor movement works with the Israeli and Palestinian people to achieve safe Israel and a viable and secure Palestine. Even when I was in Israel, I met with Israeli groups for peace and human rights and members of the Israeli Parliament for that purpose. "