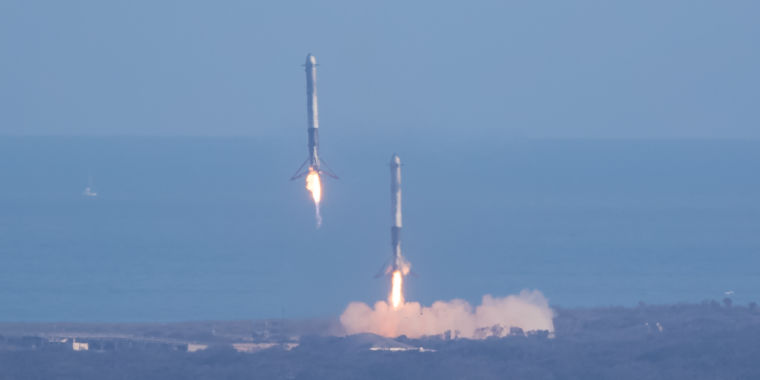 The reopening of the federal government means that launch companies can once again apply for multi-agency release licenses, and SpaceX seems to have made the most of this on Monday. The company has applied for three licenses from the Federal Communications Commission (which can be searched here).

One of the permits relates to the International Space Station's next cargo supply mission for the Dragon spacecraft, the CRS-17, which had been scheduled for March. This permission for "telemetry, tracking, and command of the dragon's cap" indicates that the mission will now not fly before April 12.

Of potentially more interest are requests for two licenses related to the launch of the next Falcon Heavy mission, Arabsat 6A, and the landing of two lateral boosters and the central core. These applications indicate that the launch of the Arabsat 6A mission will not take place before March 7 of the 39A Launch Complex of the Kennedy Space Center. This is consistent with existing estimates for the current release date.

The landing permit also confirms that SpaceX will attempt to land the two side reinforcements in its landing zone along the Florida coast – preparing for a repeat of the dramatic landings side by side during the inaugural Falcon Heavy flight in February past. The company will also try to land the central core on a drowsing ship in the Atlantic Ocean, about 1,000 km off the coast. During the first test flight of the Falcon Heavy rocket, SpaceX narrowly missed the central core.

Arabsat 6A is a large telecommunications satellite in Saudi Arabia. It weighs about 6 tons and is destined for geostationary orbit.

There's a lot going on with these landings as SpaceX plans to reuse both the lateral reinforcements and the core for its third Falcon Heavy mission, the Space Test Program-2. This flight may occur as early as April, although some deviations to the right appear likely, as a one-month turnaround of three reinforcements is ambitious. The loads from this hitchhiker's mission, purchased by the US Air Force, include six weather survey satellites, several demonstration missions, and academic projects.

One of the most intriguing burdens comes from the Planetary Society. Your LightSail 2 CubeSat project will try to make a solar-powered flight in the orbit of Earth. Once in space, the 61cm spacecraft will separate from the top stage of the Falcon Heavy rocket and undergo a series of maneuvers to deploy a light sail made of Mylar that will spread to cover an area of ​​32 square meters. This candle will try to use the constant pressure of the solar particles to rise to higher orbits around the Earth.

If the core Falcon Heavy does not land successfully on a robot ship after the Arabsat 6A flight, it is not clear how long it would take SpaceX to make another.