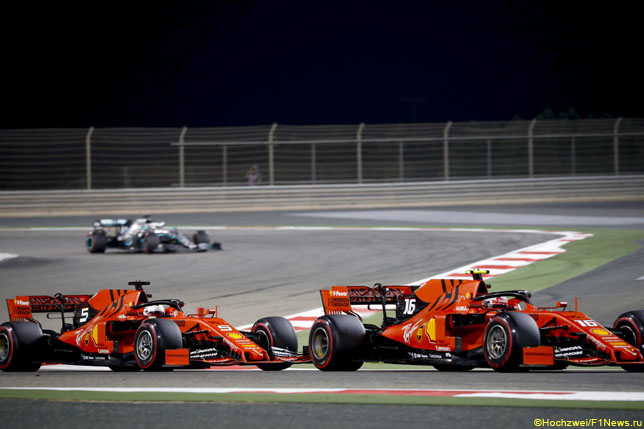 Having taken all the front row in the beginning, Ferrari hoped to consolidate its success in the race, but the Bahrain Grand Prix ended with the double victor of Mercedes. By car, Charles Lecler had problems with the engine and lost the lead, finishing third. Sebastian Vettel made a mistake, which led to the collapse of the front wing. As a result, the German made an extra pit stop and finished fifth in the race.

Charle leclaire (3rd): "This is part of the race and we know it. It was not just our day. In the final stage of the race there were problems with the plant and the car lost its rhythm. It's a shame, because before that it seemed like we were in full control of the situation.

The team is disappointed, I'm disappointed, but there was a lot positive this weekend. The crew prepared an incredible car for me – thank you so much for that. The car was easy to drive and very good.

This happens in sports – in any case, we enjoy the best of this weekend. I went first to the podium, although I did not have as much pleasure as I wanted. This is life, it happens, but we will come back stronger.

Sebastian Vettel (5): "We do not want a race like this.We started the first and second, but we did not finish in those positions.Nice night.I started well, but in the middle of the first lap I realized that it was very difficult to drive a car. Charles had fewer problems, and he overtook me without much difficulty.

So I lost my second position in the pit stop, but I managed to win. In the second segment, average tires worked a little better, but overall, we did not have the right pace.

During the fight against Lewis I made a mistake in the fourth round, one of the most difficult of the track. Suddenly I lost control of the car and turned around. At the same time I damaged the tires, there was a strong vibration, which led to the collapse of the front wing.

Today was Charles's race, but he was very unlucky. I sympathize with him and the team. "

Mattia Binotto, leader of the team: "We apologize for Charles. He led the majority of the race, led the best lap of the race. He deserved to win, and only problems of reliability, whose causes we must investigate, prevented him from winning. This is unacceptable and shows how important everything is to do everything in the smallest detail.

As for Sebastian, this sometimes happens when you fight on the edge. It is important that the car is fast. The staff also worked hard after a few quick stops. We are going home with many good points. Obviously there are things we have to deal with and we will continue to work on it. "