Hardly anyone doubts that Assassin's Creed Odyssey was far from being the last part of the series and therefore the main intrigue is most likely when waiting for the release and where users will be released this time around. And if nothing is clear with the first, then with the second, the public already has suggestions. The hint, the players are sure, was found where no one expected – in Division 2. 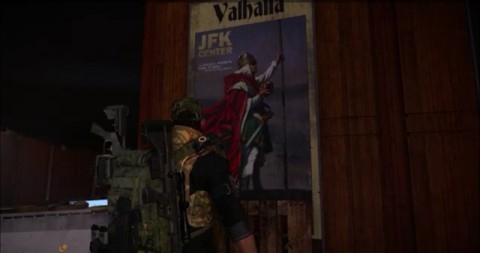 Players have found a reference to the new Assassin Creed for a long time, but journalists often do not follow players, and rumors are only broadcast now. An Easter egg was found in Division 2: a poster with the inscription "Valhalla" painted a man in red and white clothes with an unusual object in his hands. Experienced fans have discovered in the apparently seemingly imperceptible ball of the Apple of Eden – an artifact of the Assassins series.

Maybe the players just want to, but the public believes this is a direct suggestion of the next Assassin's Creed. According to the players, Ubisoft intends to change the scene to Scandinavia – the cradle of myths about Valhall. This is indicated by another curious detail. In 2018, a former employee of the company posted the concept of network art entitled Assassin's Creed Ragnarok. Later, the artist renamed the images and said that they belonged to his personal project. Of course, while all this was just a rumor, God of War's tremendous success could have drawn the attention of other developers to the Vikings' snow-covered house.