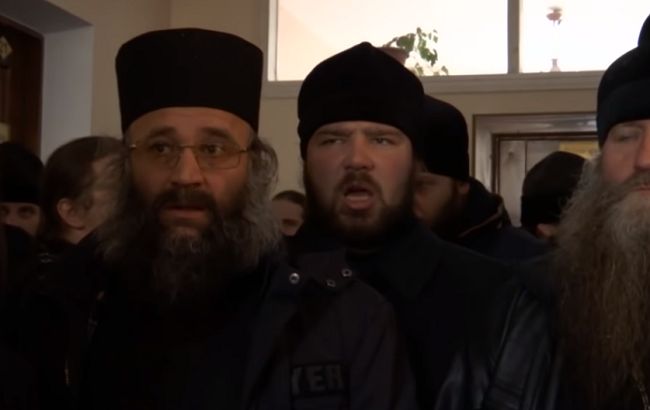 In Vinnitsa, near the city's court building, priests of the Russian Orthodox Church in Ukraine (former UOC-MP) organized a picket, which they called "prayer huts." The cause of the action was his dissatisfaction with the actions of Metropolitan of Vinnitsa and Barsky Simeon, who was reinstated in the court like head of the diocese of Vinnytsia. This is stated in the TSN plot.

Recall that the priest moved to the newly created PCU in mid-December. Together with him – and the paraffin from the Cathedral of the Transfiguration of the Savior.

In response, the synod of the Russian Orthodox Church deprived Simeon of the post of head of the diocese. At the same time, the Ecumenical Patriarch Bartholomew freed the priest from any punishment of the UOC-MP.

To prevent the Russian church from choosing the council, Simeon filed a lawsuit for legal reintegration.

But in Chernivtsi, his colleagues led the demonstration of the faithful. Under the RSA building, along with the pack, they demanded to cancel the transition from the temples to the CCA.

Under the building, MP supporters gathered from across the region. Some traveled by the transport itself, but for the most part they prepared buses, in which they organized themselves in an organized way.

In Zasavavna, believers with prayers marched to the construction of the state administration of the district, under the walls of which they unfolded posters and began to sing prayers and demanded not to give the Ukrainian churches to the MP in the CP.

Negotiations with local authorities, which continued during the demonstration, the priests are unhappy.

At the same time, the action of supporters of the Moscow Patriarchate does not find support from local residents.

"What is happening here will not do anything. On the contrary, the opposition will intensify and I believe that the priests are guilty of this," said one of the residents.

"All the priests came and incited the people against each other. There should not be that," the woman is outraged. In response, she hears from the UOC deputy who believes that "You are a dissident!"

We note that the authorities say that the decision to move the temples to a single local Ukrainian church belongs to the community and can not be canceled.

As previously reported, in the near future, the legal registration of the CCA will be completed, in particular, the governing body will be registered – the Kiev Metropolis.

Remember, on January 17, the Verkhovna Rada adopted a law that regulates the transition of religious communities from one church to another. For the transition to occur, the church's arrival at a general assembly must support such a decision by at least two-thirds of the quorum, which must be recorded in the statute of each community.