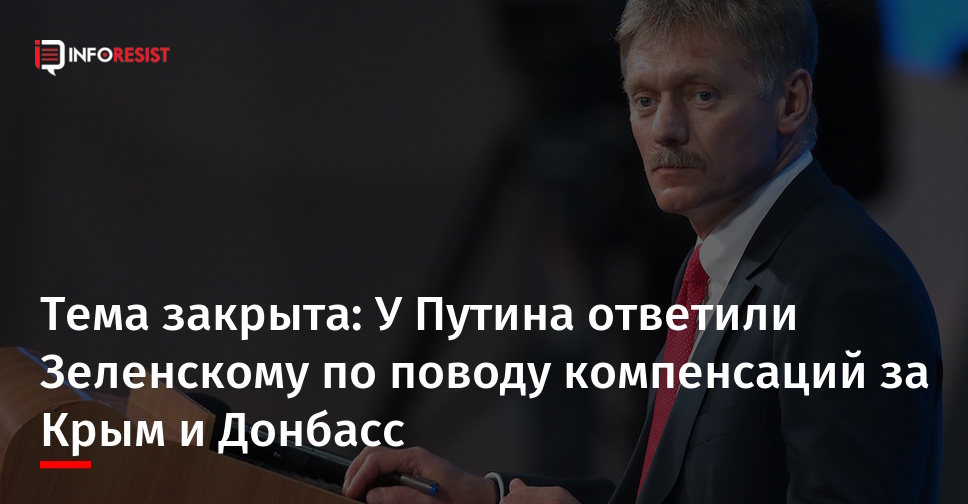 The Kremlin responded to the statement of presidential candidate Vladimir Zelensky that in case of a meeting with Russian President Vladimir Putin he would demand the return of the occupied territories of Ukraine and the payment of compensation for it.

Putin's press secretary Dmitry Peskov said that Russia was ready to explain its position on the Donbass to any politician but did not discuss the subject of property of the Crimea, transmits Interfax

"We are ready to explain to any citizen of Ukraine that Russia does not occupy Ukrainian territories. This is out of the question because the unrecognized Donbass republics were uprooted by Ukraine itself, and what is happening there is a consequence of the policy that the leadership of Ukraine is pursuing, "said Peskov.

He added that Crimea is a topic that is not at all negotiable, it is "closed once and for all". And the peninsula itself, according to the leadership of the Russian Federation, is not supposed to be occupied or attached territory.

Also in the Kremlin said that they want to see the president of Ukraine a person who "aims to resolve the situation in the Donbass."

"Of course we would like to see not the war party" in charge "of Ukraine, but the party aimed at real and step-by-step resolution of the situation in the south-east of Ukraine based on existing agreements," concluded Peskov.

Recall that on election day, March 31, showman Vladimir Zelensky told reporters at a meeting with reporters what he would tell Putin in the first meeting to be held after the return of the occupied territories.