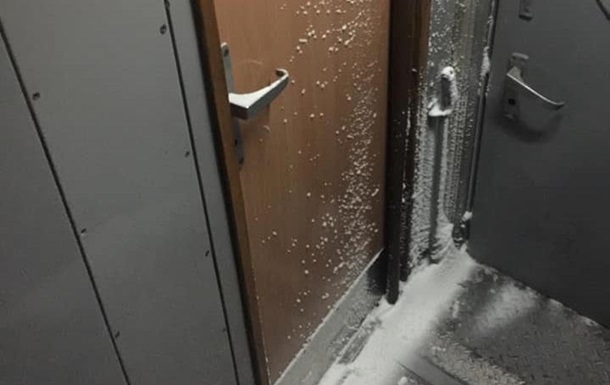 The network showed the snow-covered and dark carriages of the international train Ukrzaliznytsia Kyiv-Kosice.

The Internet showed the snow-covered and dark wagons of the Ukrzaliznytsia international train, in particular the Kiev-Kosice traffic. Relevant photos and videos published by journalist Rostislav Beghes on Facebook.

In particular, a car virtually erased is visible in the photos, and there is a pile of snow in the lobby. And judging by the fact that during the movement of one of the passengers was wearing clothes, it was cold in the car.

"It's a horror, a soft carriage, which Ukrzaliznytsia sends out to Kiev-Kosice." It seems that in such cars they were sent to the ghetto, shame and shame, and the price of a ticket is not cheap, "he wrote. social network.

He later added that as a result of this trip, he caught a cold, despite the fact that he was sleeping under two blankets.

Previously, it has been reported that Ukrzaliznytsya has almost doubled the cost of passenger bed linen for compartments and second-class carriages.

It was also known that Ukrzaliznytsa did not have sufficient funds to buy new locomotives. To extend the contract with General Electric, you need to increase freight rates.