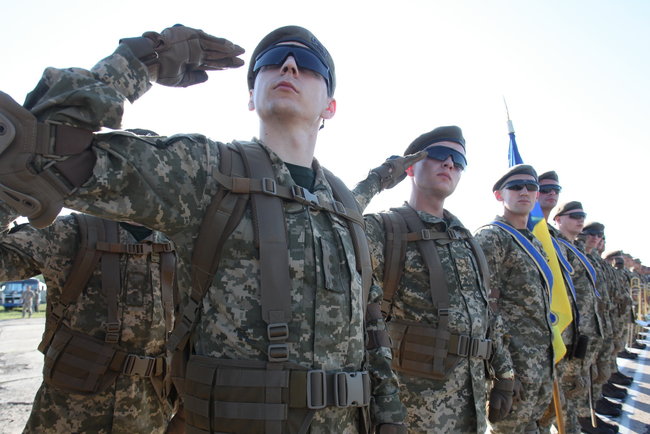 Ukraine is preparing to impose martial law. The reason was Russian aggression against Ukrainian warships.

An extraordinary meeting of the Verkhovna Rada of Ukraine was convened to consider the presidential decree on the introduction of martial law. The "Today" site monitors the situation.

We offer our readers a video broadcast of the parliamentary meeting.

17:30 Commenting on Russia's open attack on Ukrainian warships, Poroshenko spoke about intelligence, according to which the Russian Federation has amassed considerable military power near the Ukrainian borders.

"We need to reinforce the defense now, which will allow us to react and mobilize all resources as soon as possible. that the boys and girls of the first reserve are already ready to pack their backpacks, "said the head of state.

Poroshenko repeated that they will not restrict the rights and freedoms of the civilian population.

"We also do not plan to move towards full and partial mobilization … This will be possible if the Russian Federation moves on to an additional escalation. Martial law does not mean war, and does not mean our refusal to resolve the situation politically and diplomatically. I have notified our partners, "added Poroshenko, noting that" today we are heard better than yesterday or the day before. "

"The defense of Ukraine is not only the protection of military territories and equipment, it is also the protection of people. We must be ready for any action of our aggressive, unbalanced and unfortunately predictable neighbor," concluded the President of Ukraine.

17:25 Martial law on the President's proposal will last for 30 days – from 9 am on 28 November, if such decision is supported by the Rada. This Poroshenko said in his speech.

The president explained that this is necessary so that martial law does not overlap with the election campaign. After the end of martial law in December, Poroshenko will officially announce the date of the elections to be held, by law, on March 31, 2019.

17:19 Paruby asks Rada to support the introduction of martial law.

"The facts of Russian aggression at sea should be a catalyst for strengthening international sanctions against the aggressor state – the Russian Federation," the spokesman said.

17:12 There may be chaos in the country: the former presidents of Ukraine oppose. They do not exclude that the Kremlin could organize this provocation in Azov intentionally in order to impose martial law in Ukraine, which would lead to business paralysis and uncontrollable inflation.

17:10 Presidential decree provides for the introduction of martial law in full – about this "Today," said deputy of the people of Ukraine (faction Petro Poroshenko Bloc), member of the Rada Committee on National Security and Defense Oleksandr Bryhynets.

16:52 The president of the Verkhovna Rada, Andrei Parubiy, addressed the people's deputies, after which announced a 10-minute break.

"Yesterday, for the first time, Russia … openly, without hiding, used armed forces against Ukraine," said the head of the Ukrainian parliament, noting that, in fact, the Russian Federation has been carrying out armed aggressions against Ukraine for many years.

"If earlier they tried to disguise their fighters under the" green men "… but now the world has seen undisputed evidence of Russian aggression. The state of Ukraine must respond adequately – decisively and swiftly. Therefore, I fully support the decision of the National Security and Defense Council on the imposition of martial law in Ukraine, "said Parubiy.

He also noted that the purpose of Russia – "the continuation of the war, damage to the economy of Ukraine.

"The facts of Russian aggression at sea should be a catalyst for strengthening international sanctions against the aggressor state – the Russian Federation," said the president of the Rada.

According to him, Ukraine is awaiting a reaction from NATO, the UN, the EU and other international partners, otherwise "the consequences can be global".

16:36 Under the Verkhovna Rada, however, members of the C-14 and National Corps organizations are meeting, reports the Segodnya correspondent. Photos of the scene:

16:22 The President of the Parliament, Andrei Paruby, invited the deputies of the people to the meeting room and began to register. But the Rada still could not open the meeting: representatives of the Radical Party are blocking the podium.

15:53 The National Security Committee recommended that Parliament approve the presidential decree on martial law. All members of the committee present at the meeting voted unanimously for this decision.

15:52 Became known as in the case of martial law, transportation and communication will work. Ukrainian Infrastructure Minister Volodymyr Omelyan said his department was ready to impose traffic restrictions or reorient directions. He also added that security measures and cyber defense in critical infrastructure of Ukraine have already been strengthened.

15:37 Poroshenko decreed the decision of the National Security Council. Control over the indicated execution assigned to the Secretary of the NSDC Alexander Turchinov

15:25 Business "stopped" and the dollar: an economist called the risks of imposing martial law.

"I would not be surprised if people rush to take deposits, withdraw money from ATMs." Many entrepreneurs who bought government bonds from Ukraine will sell their money overseas, so the rate, the risk, the withdrawal of the currency and the fall in GDP A businessman will not do a new workshop, hire workers until everything is finished, and it will not be 60 days, but a year will pass until he calms down and does business, "said Alexander Okhrimenko, head of the Ukrainian center. site Today.

14:55 Political analyst Vladimir Fesenko appreciated the possibility of martial law like quite high.

"There will likely be differences in martial law in the frontline zone, in the adjacent territories to the Sea of ​​Azov and other regions of the country," said the chairman of the Council for Applied Policy Research "Penta" Vladimir Fesenko in the comment to the site "Today".

14:54 Anticipating martial law, the NBU asked to fill the ATMs with cash.

14:27 According to the director of corporate communications PJSC "Ukrtelecom" Mikhail Shuranov, The company is fully prepared for the introduction of martial law.

13:44 Political analyst Taras Zagorodniy said in a comment to the site "Today" that The document on the introduction of martial law does not affect the life of the countrybecause we already have regions with a special status.

"In fact, we already have a law on the reintegration of the Donbass, which allows for the requisition of housing, detention of persons without trial or investigation, and it is already in force, and no one bother to bring it to the Sea of ​​Azov," says Zagorodniy.

12:43 The Verkhovna Rada can only introduce martial law in certain territories and only for 30 days. This was announced on Facebook by MP Borislav Bereza.

12:30 The NBU has urged bankers urgently because of possible martial law.

"The Board of the National Bank of Ukraine, led by its chairman, Jacob Smoliem, holds an extraordinary meeting with the leaders of the 40 largest banks in the country," – noted in the National Bank.

At the same time, the NBU has ensured that there is no reason to introduce administrative measures in the money and currency markets.

12:09 International Monetary Fund sees no legal obstacles to continued cooperation with Ukraine – The IMF responded to the possibility of martial law in Ukraine.

"The Foundation has already collaborated with several countries in whose territory military conflicts of various activities occurred," – is counted in the background message.

11:32 The risk of martial law has hit Ukrainian stocks and eurobonds: the value of companies and domestic bonds is falling on Western stock exchanges

In particular, the shares of some companies on the London Stock Exchange (LSE) in the first 20 minutes of trading on Monday fell 2.14%. The decline is also seen on the Warsaw Stock Exchange.

11:45 Martial law will not affect the work of civil aviation, said the former head of the State Aviation Service of Ukraine Denis Antonyuk.

"For the civil aviation of Ukraine, after the introduction of martial law nothing will change in principle – we have long closed the air communications with Russia.The only question that can arise is an increase in the cost of aviation insurance"Antonyuk observed.

10:59 The first Verkhovna Rada vice-president, Irina Gerashchenko, stated that Martial law will not cancel the elections in Ukraine.

"The elections will be. Martial law does not mean automatic cancellation of elections," – wrote Gerashchenko on his Facebook page.

08:33 The National Bank of Ukraine has martial law will not affect the work of banks.

"Bank branches and offices will function normally"– said the head of the National Bank of Ukraine (NBU), Jacob Smoliy.

03:06 Ukrainian police transferred to reinforced duty. This was announced by the head of the National Police, Sergey Knyazev, at a meeting of the National Security and Defense Council on Monday night.

"We are now providing security in conjunction with the National Guard of consular offices and embassies" – he said.

0:00 On November 26, at exactly midnight, a meeting of the National Security and Defense Council was convened for an emergency summons, in which it was decided to impose martial law in Ukraine for a period of 60 days.

President of Ukraine Petro Poroshenko supported the decision of the National Security and Defense Council and offered to contact him on the Verkhovna Rada.

"I, as president, as supreme commander of the Armed Forces, according to the Constitution, I decided to support the proposal of the military committee to make an appropriate decision at a meeting of the National Security Council and direct it to the Verkhovna Rada of Ukraine, said Poroshenko.

The Ukrainian leader expects parliament to support this decision at an extraordinary meeting, which will be held today, November 26, at 4 pm.

"I appeal to the people's deputies tomorrow to arrive at the emergency meeting of the Verkhovna Rada so that we can hold a closed discussion of the draft decision and the decision-making responsible necessary to ensure the defense of the State"– he said.

The president promised that there would be no mobilization, as well as restrictions on the rights and freedoms of citizens.

Recall that on November 25, the Russian military captured Ukrainian ships, which left the Kerch Strait in accordance with all the laws of international law. As a result of the bombing of Ukrainian ships, six Ukrainian soldiers were injured.