Police opened criminal proceedings on the fact of the appeal of the deputy City Council of Kharkiv in connection with the decision of most of his colleagues to return the name of the prospectus named after George Zhukov, police in the Kharkiv region reported.

According to police, on June 19, at 7:00 p.m., the Kharkov Police Department in Shevchenko received an appeal from the Deputy Member of the Kharkiv City Council, Igor Chernyak.

The author of the document believes that the actions of deputies and officials of the Kharkiv City Council may contain signs of crime related to the spread of communist and Nazi symbols and propaganda of communist and nationalist (Nazi) totalitarian regimes, which resulted in the return of the original name to Marshall Zhukov Avenue. and dismount from the tents of Liberty Square "All for victory".

The Kharkiv police made this statement in the Unified Record of Pretrial Investigations under Part 1 of art. 364 (abuse of power or official position) of the Criminal Code of Ukraine.

A pre-trial investigation is conducted to clarify all the circumstances of the event.

Kernes chose not to vote

The mayor of Kharkiv, Gennady Kernes, did not support the renaming of the avenue Peter Grigorenko. Voting data by name attests, – reports . 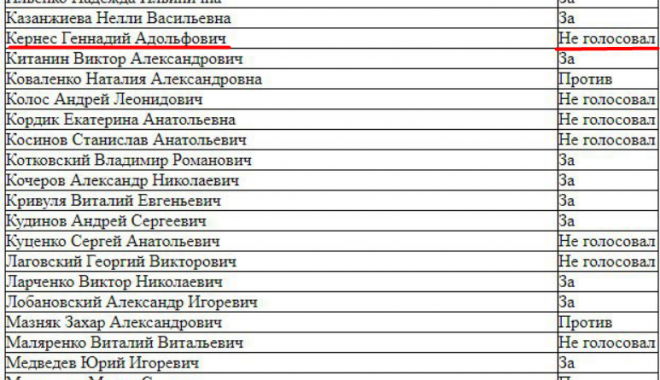 According to the data of the electronic system, at 11:09 the deputies of the City Council began to question No. 74 "On the consideration of an electronic petition." The draft decision envisaged that the avenue of the New House received the old name, Marshal Zhukov, and the name of Peter Grigorenko would be the name of a new street linking Klochkovskaya and Rymarskaya.

"Kharkov was released on August 23. He stayed on the podium with Marshal Konev here in Kharkov, near the monument to Taras Shevchenko," Kernes said.

As a result, the decision to rename was made by 59 deputies. However, data from the site of the city council suggest that the mayor himself, despite his pretentious words, did not participate in the vote. This information is confirmed by the electronic scoreboard with the layout of the hall, where the Kernes chair is marked in white.

Remember, after placing flowers at Glory Memorial on May 9, Kernes said that renaming the prospectus in honor of Marshal Zhukov is a matter of "historical justice." The official also ensured that the city authorities act in accordance with current legislation.

Recall, on May 8, Kharkiv Mayor Gennady Kernes provided in his social network a petition to rename Grigorenko Avenue to Zhukov Avenue and demolish a volunteer tent. Both petitions in two days marked more than 5,000 votes. Thousands of people from Kharkiv left in a veche to express their disagreement with the demolition and renaming of the tent. June 2, activists threw down a monument to Zhukov. Later, Kernes said that the monument will be restored. President Vladimir Zelensky has asked the Kharkiv authorities to make a decision that is as acceptable as possible to either party. In addition, the demolition of the monument in Kharkov, commented in the Ministry of Foreign Affairs. On June 13, Kharkov activists were searched. On June 19, at the Town Hall session, they voted to rename the Grigorenko Prospectus in Kharkov to Marechal Zhukov Avenue. The Ukrainian Institute of National Memory requires Kernes not to sign the decision. The mayor is threatened with criminal responsibility.

You can discuss this news on our

Read all news on our channel and enroll us in