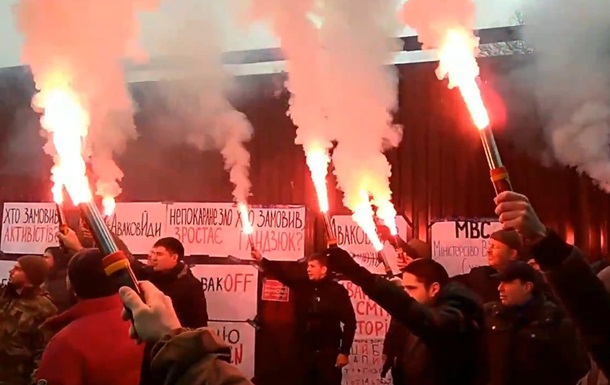 Activists demand the resignation of Avakov

Participants in the protest action demanding the resignation of the head of the Ministry of Internal Affairs and the Attorney General, because of which, according to the demonstrators, reforms were frustrated and attacks on activists continued.

Near Saturday, November 17, about 100 activists gathered near the special complex of the department where the interior minister, Arsen Avakov, lives. They accuse Avakov of failure to reform the law and demand his resignation, according to RBC-Ukraine.

Demonstrators say the failure of the reforms has resulted in attacks on civilian activists and the death of Pavel Sheremet, Irina Nozdrovskaya, Ekaterina Gandzyuk and others.

"When they kill us, Avakov puts lemons at rest and, as messages, activists are evil. Instead of solving crimes, we are trying to convey the idea that killing people, if you do not like their position, is normal. badly, leading to chaos inside the country, "said activist Sergei Sternenko of Odessa, who survived several attacks.

Note that the action was organized by Avtomaydan, the CPC and the public initiative Who ordered Katya Gandzyuk? Activists from the C14 nationalist organization and people in camouflage with Donbass chevrons also came. There are several police officers near the fence of the special complex.

Avakov – at the entrance! pic.twitter.com/1jStBeHgzR

Recall that in early November 73, public organizations issued a statement about the failure of the reform of the law enforcement system and demanded the resignation of Avakov.

It should be noted that since the beginning of 2018 in Ukraine, at least 54 attacks and attempts against the lives of activists have been recorded.