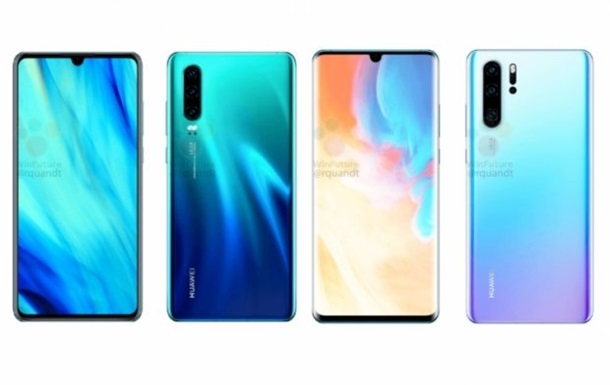 Smartphones are built on the Kirin 980 single-chip platform. Android 9.0 with the EMUI 9.1 interface came out as the OS. The newer model received 6-8 GB of RAM and 128 GB of flash memory, in the older model, more than one and the other: 8 and 256 GB respectively. Both models support dual SIM cards and NM memory cards up to 256 GB.

Among the common features of the models are fingerprint scanners that are pressure sensitive, protecting the case against dust and water according to the degree of IP68, NFC support, dual-band GPS modules, Bluetooth 5.0 and Wi- Fi 802.11ac, USB 3.1 Gen 1 Type-C ports The front-facing cameras are also the same – they use 32-megapixel sensors and F / 2.0 aperture lenses.

At the same time, the main camera P30 is simpler – there is no ToF module in it. The main sensor has a resolution of 40 Mp but a slightly smaller aperture lens with an F / 1.8 aperture is connected to it. A 16-megapixel array is connected to an F / 2.2 ultra-wide aperture lens, and finally an 8-megapixel array in the third module examines the world through a telephoto lens with an F / 2.4 diaphragm.

There are differences in the energy subsystem. Huawei P30 received a battery capacity of 3650 mAh and supports a fast charging capacity of 22.5 watts. The capacity of the Huawei P30 Pro battery over, 4200 mAh.

Also called the best smartphone of the year. It was a gadget from Huawei.