Fire in a psychiatric hospital in Odessa – photos, videos and details 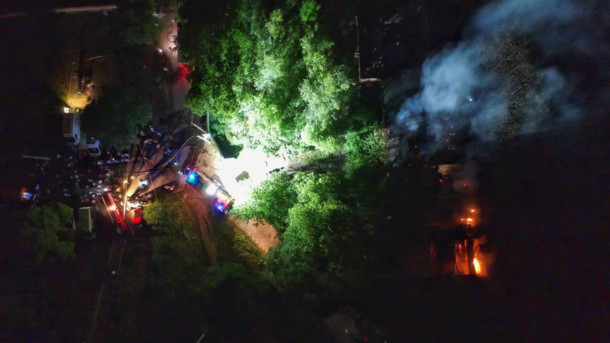 Six people died as a result of a fire, four others are in serious condition.

Deadly fire in a psychiatric hospital in Odessa. Photo: Duma

In Odessa, there was a large-scale fire in a psychiatric clinicwho killed six people. The fire occurred late in the evening of June 10 – the roof of a one-story wooden building caught fire and the fire quickly spread to an area of ​​500 square meters.

"During the firefight, 15 people were evacuated, four people were found at the scene of the fire, and six people in a serious condition were hospitalized with product poisoning.To put out the fire of the State Emergency Service, attracted 12 units of equipment and 57 employees. At 22:53 the fire was located, at 23:19 the fire was eliminated "– lifeguards have reported.

As Darya Sidorovskaya, the correspondent today, discovered at the scene of the tragedy, the main version of the fire, the rescuers who examined the site of the fire, consider the fire. The criminal case was opened under the article "premeditated murder": one nurse and five patients died.

Correspondents from Segodnya, who visited the site of the tragedy, said the investigative task force continues to work at the scene of the blaze, and their work is monitored by a crowd of onlookers, including children. The hospital guard, who intervened on the morning shift after the tragedy, admitted that during the fire "the horror was happening here".

It is also reported that police searched the offices of three doctors in the department on fire, looking for documents about the fire protection of the building. In addition, officials of the Security Service of Ukraine conducted an interrogation of the deputy chief medical officer in a psychiatric hospital.

In the burned bodies World War II and hostilities in Afghanistan were disabled; many of them did not even understand what was happening. Four people remain in the hospital, and their condition is called heavy but stable. All victims have no burns, their diagnosis – "combustion product poisoning".

Around five o'clock in the morning, the head of the department where the fire was afire asked the doctors for help. He's on outpatient treatment.

It was also known that even before the rescuers arrived, the hospital staff brought in about fifty patients from the burning building. Of the six patients in the clinic, who were taken to the nearest hospital, two died without regaining consciousness due to product-poisoning.

In addition, it is reported that the hospital for which the victims were taken does not have a specialized burn ward, but there is a pressure chamber, which helped stabilize the condition of the survivors. As the doctors explained, if rescuers decided to send the "fire victims" to a specialized unit, the chances of survival of the victims would be extremely small.

In total, 57 people were in the building on fire. Including three employees of the medical institution.

"Most would not be able to move independently.The bars here are only in the windows of the rooms where the preparations are stored"– said the chief physician of Anatoly Voloschuk hospital.

"A fire in Odessa's Psychiatric Hospital, a terrible tragedy, has been extinguished but six people have already died, and I am ordering that Prime Minister Vladimir Groisman immediately set up a state commission of inquiry.He wrote.

The head of government expressed condolences to the relatives of the victims and promised that the criminals will be established during the investigation.

"An investigation will be carried out and criminals will be established, but I want to appeal to those whose responsibilities it is to take care that this does not happen." This tragedy is a bitter reminder that your slightest carelessness can lead innocent people to be killed. seek the guilty but also learn the responsibility "– said Groisman.

In addition, according to the rescue teams, which attracted 57 people and 12 fire-fighting equipment, water scarcity has occurred since the beginning of the firefight and there has been no pressure on fire hydrants.

Meanwhile, according to the chief physician of the flaming psychiatric hospital Anatoly Voloshchuk, in department 7 where a fire broke out, there were wooden partitions, but they were treated with antiflammable mixtures, and there are acts on the implementation of these works. In addition, a fire alarm was recently installed on the unit.

You are watching the news "Deadly fire in a psychiatric hospital in Odessa: the main details, photos and video". Other Odessa News see in the block "Latest News"