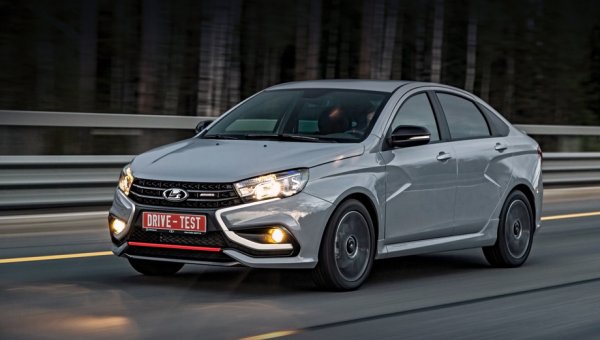 The Russians are confident that AvtoVAZ overestimates the new "Vesta", positioning it as a racing sports car, but at the same time the car has obvious advantages. In one of the online communities, users discussed a new sports sedan LADA Vesta Sport, and the reason for the discussion was the comment of an AvtoVAZ representative. The LADA Social Team noted that the new "Vesta" was built using racing technologies, and also has a brilliant special style and more than 205 unique details. "We believe that the prefix Sport for the name LADA Vesta was not in vain," summarized the representative of the brand.

Unfortunately, not all Russians think the same. A heated controversy arose in the comments, and the technology and power of LADA Vesta Sport laughed online. First of all, motorists believe that 145 horsepower is not enough for such a machine. As one example, one of the commentators quoted Japanese sports cars from the 1980s, which even today distribute 8,000 rpm, perfectly managed even at a speed of 220 kilometers per hour. Also in the comments they remembered the 2004 Honda Civic, which is equipped with a 1.8-liter engine with 170 horsepower. The acceleration to 100 kilometers per hour, on average, takes 6.1 seconds.

Another driver said he owns a new Hyundai Solaris, and recently he had the opportunity to participate in the "traffic light race" with the LADA Vesta Sport. The man noticed that "Solaris" was faster. "This racing technology?" The disabled car, "wrote the car enthusiast.

"The more you suffer?": The driver complained about the next problems with the UAZ engine "Patriot"

This time, a strong "maslozhor" began in "Patrick", accompanied by incorrect operation of the heating system.

At the same time, in the comments, it was noted that the sport "Vesta" actually has a number of advantages. First of all, there are no full-fledged sports cars on the Russian market that would cost less than 3,000,000 rubles. It should be noted that not only "horses" are important for such a car, but controllability and dynamics than the LADA Vesta Sport can be proud of. In addition, many compare the "Vesta" with the models after tuning the garage, forgetting that this is a balanced factory car that has already met its audience. Over time, as we are confident in the network, the LADA Vesta Sport will become a favorite of SWAPO fans and modifications made by you, having a well-known engine and tuner design.