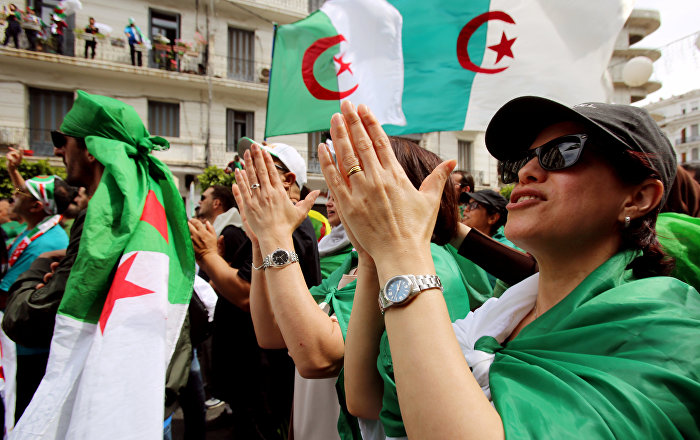 Algerian army chief of staff, Lieutenant General Kayed Saleh, criticized the lifting of flags beyond the national flag of Algeria in demonstrations calling for the departure and responsibility of the symbols of the Bouteflika regime, describing it as "a delicate issue and one attempt to break the marches "in reference to the" Amazigh flags ".

"Algeria has a flag, for which millions of martyrs have been martyred, and a flag is the national flag, the only one representing Algeria, its people and its territorial unit," Salih said in a speech at the third military zone in Bashar.

He said the lifting of these banners "an attempt to penetrate the marches," stressing that "there is no fear for the future of Algeria, the country of millions of martyrs because they will know thanks to their loyal children how to seek their way to security."

He pointed out that the military gave "strict instructions to the security services to implement the law," referring to the prevention of raising flags at demonstrations.

He attributed the commander of the Algerian army for the first time the reasons for the crisis that the country is passing 5 years ago to the "corruption", noting that the wheel of development will start in Algeria at a faster pace with determination and higher goals , and no place for an economic crisis, and no other after the country's liberation of the gang and corruption and spoilers and violators of the Secretariat "He said.

Algeria is on the verge of an unprecedented campaign of arrests and rallies that toppled businessmen, ministers and politicians as they pursue legal proceedings against dozens of people, mostly close to former President Abdelaziz Bouteflika.

Algeria is undergoing a political crisis as protests continue to demand the departure of all the symbols of President Bouteflika's regime, who stepped down in April.