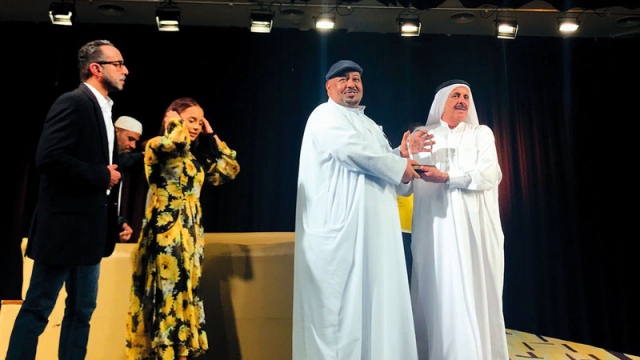 The Cultural Foundation Sultan bin Ali Al Owais organized yesterday the performance of the fourth stage of the modern theatrical group in Sharjah, which appeared before a distinct public of Al Muddabi Al Emarat Al Yasmeen, critics, intellectuals, intellectuals and friends of the Al Owais Cultural Foundation . The participants, who have long applauded the beautiful and harmonious performance of the team.

The play is written by Talal Mahmoud and directed by Ibrahim Salem and is inspired by the play by French writer Laurent Baffi, which features characters living in a vortex of obsessive-compulsive disorder. Events take place in a waiting room for a psychiatrist, Dr Nader, Each of them suffers a problem, each awaiting his role with that doctor, with an hour suspended in the depth of the upper and middle panel space, refers to the room almost a third, and begin dialogues within the atmosphere reveals the problem of each visitor to the clinic and ends up realizing that the solution is not in this place is elsewhere.

Fouad, a man in the late 1940s who suffers from psychological agitation, curses during his speech a great man of 35 years committed with obsessive-compulsive disorder, Sami, a young man in the 1920s who suffers satisfactory illusions that avoid walking in planned places. , Suffers from repeated speech permanently, Yara works in the field of sterilization and suffers from lack of hygiene, receptionist of Asmahan in the psychiatric clinic.

At the end of the presentation, a member of the Board of Directors of the Sultan Bin Ali Al Owais Cultural Foundation, Dr. Mohammed Abdullah Al Mutawa, honored the theater staff and presented him with a commemorative shield and thanked him for his efforts in this great work he deserves appreciation. The theater won several awards at Sharjah Theater Days.