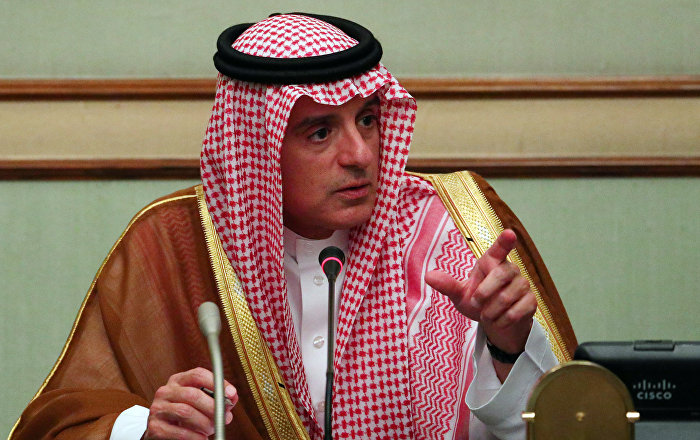 Saudi Foreign Minister Adel al-Jubeir said it is absurd to imagine any party trying to drag superpowers into a war with Iran.

Al-Jubeir warned that "If Iran closes the Strait of Hormuz, this will provoke a very strong reaction."He added that" the international community is determined to deal with Iran's aggressive behavior, "as" the pace of Iranian attacks has increased in recent weeks, "according to Al Arabiya television.

"We need to calm the region, but we can not do it at a time when Iran is causing a lot of damage," Al-Jubeir told reporters in London.

Four tankers off the coast of the United Arab Emirates in Fujairah and two in the Gulf of Oman were attacked in two separate incidents. Iran was blamed for the attacks.

The Saudi minister demanded that "Iran change its aggressive behavior and stop supporting terrorism," and that it "return to the normal state," as he said.

"There is enough evidence that Iran is behind the recent attacks on oil tankers," al-Jubair said.

Fears of a confrontation between Iran and the United States have increased since the attack on two oil tankers near the strategic Strait of Hormuz on Thursday that Washington attributed to Iran.

Tehran denied involvement in the attack on oil tankers last week and in May, but the attacks damaged relations that were already deteriorating following Trump's decision to withdraw in May from an international nuclear deal with Iran.

Since its withdrawal, Trump has renewed and expanded US sanctions, forcing countries around the world to boycott Iranian oil or face sanctions.

The ISNA news agency quoted Iran's chief of staff, Mohammad Baqri, as saying his country is "ready to protect the strait if other parties try to create problems," he said.

"If Iran can not export its oil through the strait, it certainly will not," he said on the sidelines of the 23rd meeting of the leaders and chiefs of the police force.

He stressed that his country "does not intend to close the strait now, but can do so if forced to take action against enemies," referring to the United States, adding that the Iranian army "is ready to implement any decision on the closure of the crossing. Iranian authorities ". Enemies end up forcing us to have to do this. "