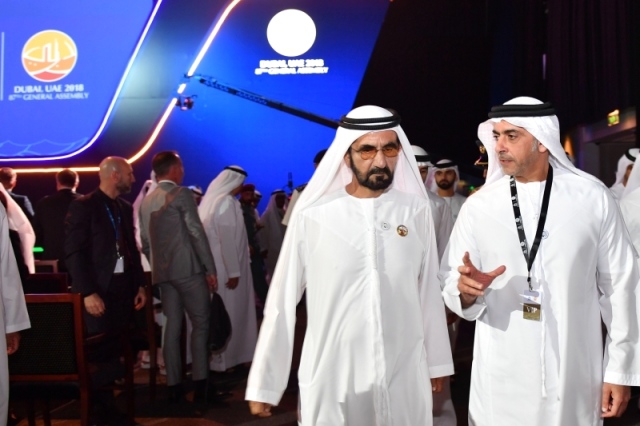 United Arab Emirates Vice-President, Prime Minister and Ruler of Dubai His Highness Sheikh Mohammed bin Rashid Al Maktoum stated that the UAE is putting all necessary means to strengthen cooperation and coordination with INTERPOL and all relevant international bodies to fight crime and reduce its spread among our society and communities. So that people can live where they are safely, safely and happily. INTERPOL's First Vice-President, Kim Young-yang, Interpol Secretary-General and Secretary-General of the Organization of the Islamic Conference (Interpol), Ilean Al-Murr, Ministers of the Interior, Security and Police Leaders, and International Experts of more than 195 countries, including the United Arab Emirates.

HH Sheikh Mohammed praised the efforts of the Interior Ministry, led by General Sheikh Saif bin Zayed Al Nahyan, in all its agencies and national cadres, who wish to extend cooperation with INTERPOL and the global bodies and leaders of security and policing for societies free from violence and extremism. Crime and human rights violations, he welcomed the opening of a large Interpol headquarters in Abu Dhabi, based in Lyon, France, with offices in the United States, Belgium, Argentina and Singapore.

His Highness considered this step to reflect absolute respect and confidence in the UAE and its institutions and its moderate and open political approach to all countries and peoples. His Highness Sheikh Mohammed bin Rashid Al Maktoum, in a Twitter post, said: "Yesterday I participated in part of the INTERPOL General Assembly, which is held for the first time in the United Arab Emirates with 192 countries, The world is called more than never to coordinate efforts against organized and transnational crime to make the future of the world safer and safer. "

HH Sheikh Mohammed bin Rashid Al Maktoum, Chairman of INTERPOL's Board of Trustees, witnessed INTERPOL's national peace and peace ceremony and a minute's silence in honor of the INTERPOL victims who died in the course of their humanitarian and moral duty in different regions of the world. On the development and achievements of the State in various fields, especially in the security and crime-fighting and terrorism sector through experienced and high-tech personnel employed by the police and the United Arab Emirates Ministry of the Interior, especially the Dubai Police , which has become one of the blood and sophisticated police and security services in the world.

HH Sheikh Saif bin Zayed Al Nahyan welcomed the guests of the State participating in the Interpol General Assembly and thanked His Highness Sheikh Mohammed bin Rashid Al Maktoum for sponsoring and honoring the conference which highlights the UAE's interest in leadership, government and support to Interpol and its active contribution. To fulfill its objectives and to fully fulfill its mission to reduce crime and organized crime, to combat terrorism and extremism and to root its roots wherever it may be, and to achieve social, political and economic security and stability for all societies and people of the world.

The United Arab Emirates, under the leadership of His Highness Sheikh Khalifa bin Zayed Al Nahyan, President of the United Arab Emirates, is seeking all possible means and with the support of His Highness Sheikh Mohammed bin Rashid Al Maktoum, His Highness Sheikh Mohammed bin Zayed Al Nahyan, the Supreme Commander of the Armed Forces will always be at the forefront in all fields and at various levels to achieve the number one with merit and trust and will not yield in order to achieve this goal, the efforts of our national cadres and under the guidance of our wise leadership. HH Sheikh Mohammed praised the humanitarian, social, cultural and educational initiatives launched by His Highness Sheikh Mohammed bin Rashid Al Maktoum to encourage people and encourage the work and practices that serve mankind and the happiness of mankind on a global level.

The Deputy Prime Minister and Interior Minister also praised Interpol's efforts to combat crime in all its forms and methods and to reduce this serious scourge that threatens the security and protection of communities and their property and prosperity.

Pointing to the vital and active role played by INTERPOL since the foundation of the organization more than 100 years ago in the Principality of Monaco, France, and wished success at the conference held for the first time in the United Arab Emirates, reflecting the importance of our country and its prestige at the country level.

Kim Yongyang, senior vice president of FAO, thanked the UAE for their leadership, government and institutions in hosting the organization's 87th session, noting the logistical facilities and the great hospitality offered to the participants.

He also praised the constructive cooperation shown by the Interior Ministry in the United Arab Emirates with all its organs and departments, led by His Highness Sheikh Saif bin Zayed Al Nahyan, who helps INTERPOL fulfill its obligations and fulfill its mission with great success and responsibility.