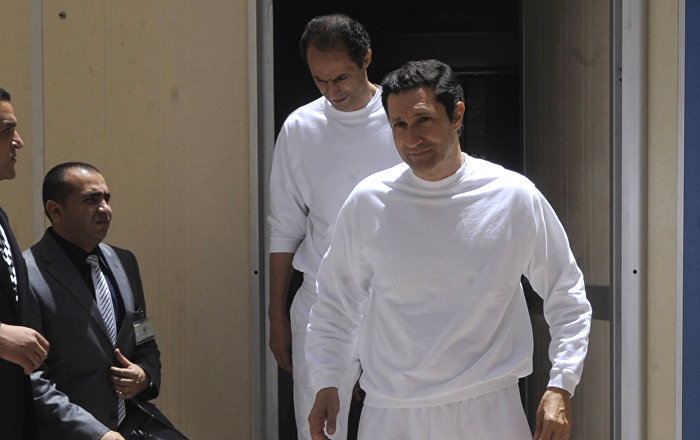 Alaa Mubarak, the son of former Egyptian President Hosni Mubarak, disputed the controversy raised over the questions he asked about the deal last Thursday, saying some of them doubted its importance.

Alaa Mubarak said in a tweet published Tuesday morning through his official Twitter account that this skepticism is mistaken, adding that Egypt has liberated all its lands and has a strong army that protects it, as he said.

He added that part of the controversy over the settlement of the century is about the Arab territories occupied by Israel, wondering how the American will deal with them when the agreement is announced.

Egypt continues to rebuild Sinai with large projects As we saw yesterday, there is still some controversy over the century agreement for the Arab land occupied by Israel, How will America deal with this when the agreement is announced?

Alaa asked several questions in his earlier comment, saying, "There is a lot of talk in the media about the so-called agreement of the century! What is the reality of this agreement? What are the characteristics, and what is the purpose, and who are the parties to this agreement? Is it a political or economic agreement? "

A US aide to President Donald Trump, Jared Kouchner, said last April that the Middle East peace plan will not be unveiled until June after the end of Ramadan, according to a Trump official.

According to media reports, the US peace plan to resolve the Israeli-Palestinian conflict known as the "Century Agreement" will include investment of tens of billions of dollars in the West Bank, the Gaza Strip and the countries of the region .

Lots of talk in the media about the so-called Century agreement! What is the truth about this business! What are its characteristics, what is its purpose and who are the parties to this business? Who benefits from this and is it a political or economic agreement? Under this agreement, will any Arab land be ceded? Questions looking for answers!

According to the newspaper, the allocation of 25 billion dollars to the West Bank and Gaza Strip over the next 10 years, in addition to the investment of $ 40 billion in Egypt and Jordan and perhaps in Lebanon.

The newspaper said that other sources who spoke to US President George W. Bush's adviser, Jared Kouchner, said the data is not necessarily accurate, but stressed that "investments will reach tens of billions of dollars."

On Sunday (April 21), the Under-Secretary-General of the Arab League said Arab countries could not accept an undeclared US peace plan for Israeli-Palestinian peace, known as the "century agreement."

Ambassador Hossam Zaki said any such agreement would not achieve "lasting peace" in the region if it failed to address Palestinian concerns.