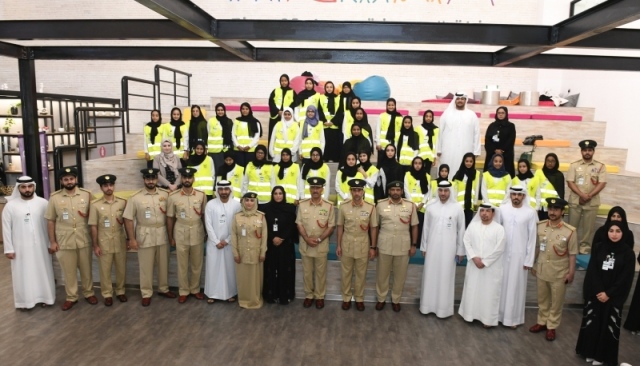 Maj. Gen. Abdullah Khalifa Al Marri, commander in chief of the Dubai Police, has launched the "Hakaton" event for school-based education protection students organized by the Dubai Police Science Council and the Dubai Police Police Council in Center for International Protection on Avenida Circal. "In preparation for the city's Youth Builders Championship, launched by His Highness Sheik Hamdan bin Mohammed Rashid Al Maktoum, Crown Prince of Dubai and President of the Executive Council, which aims to engage young people aged 11 to 18 in the process of improving government services and designing future services and highlight the ambitions And look forward to the young people on the government services, so as to promote cooperation among young people and government agencies.

Al-Marri met with the students who participated in the first day of Hacathon, which was dedicated to the students while the second day will be dedicated to students, and encouraged them to think creatively and present their ideas in government departments in the future, noting that the Hacathon is an opportunity for them to brainstorm ideas and creative ideas, Wishing them every success.

On the subject of haccathon, Dr. Rawda Al Shamsi, a member of the Dubai Police Science Council, confirmed that the Dubai Police Council and the Dubai Police Police Board organized Haccathon for school students for the protection of education on the guidelines of Maj. Gen. Abdullah Khalifa Al Marri, Commander-in-Chief of the Dubai Police. The two councils formed a working group and continued the faculty in schools and selected the most outstanding and creative students in their studies and ideas.

Builders of the city

She added that the two councils presented to the students selected by the faculty of 30 students and 30 students, a brief on the youth builders race of the city, and then distributed to seven groups in which young people chose to improve certain services within the list of services included in the tournament.

Mitha Al Gergawi, Project Manager for City Builders, General Secretary of the Executive Council, said the tournament includes two main categories: the category of improvement of government services, through which young people can be selected from 27 services and ideas for improvement . And future government services.