Five minutes protect you from cervical cancer – S A N A 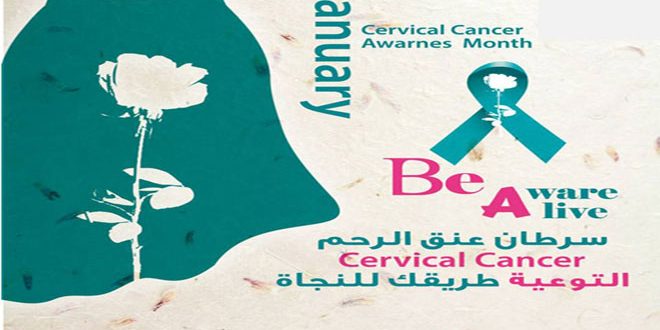 A simple five-minute test will prevent a long treatment journey for all women in the world to encourage them to take a routine screening test for cervical cancer early.

Cervical cancer is the fourth most common cancer among women after registering 570,000 new infections worldwide in 2018, 6.6% of all cases, according to the World Health Organization (WHO), where 90% of deaths were found in low- and middle-income countries.

Cervical smear examination is a simple procedure that reveals cellular precancerous changes, according to the director of the General Authority of the Zahrawi Hospital for Obstetrics and Gynecology, Dr. Rafael Atallah, stressing the need to start it after 3 years of marriage and repeated it periodically every three years and can be discontinued according to the overall health recommendations after 65 years.

Treatment measures are limited in the case of diagnosis of precancerous cell changes in the cervix, Atallah shows a local procedure or a simple hysterectomy of about 100%, in late diagnosis, doctors have to remove the uterus and lymph nodes are treated with chemotherapy and radiotherapy. Complications and mental pressure in women with lower cure rates.

Most cases of cervical cancer occur as a result of human papillomavirus (HPV), which is transmitted primarily through sexual contact. It starts with cellular changes that turn into cancer within a period of 10 to 15 years.

The gynecologist shows that the feeling of a woman with symptoms of cervical cancer – recurrent infections that do not respond to treatment and bleeding after sexual intercourse – means that she is in an advanced state, which "we try to avoid by early detection."

Al-Zahrawi Hospital performs a Pap smear and endoscopic cervical endoscopy. This is a post-bacilloscopy diagnostic step according to its procedure, which indicates that the clinic performs 3 training sessions for about 20 specialists from different provinces in methods during the year.

Atallah said that Ministry of Health centers play an important role in encouraging women to perform defamation tests through reproductive health clinics, some of which are free, noting that the spread of their culture is a responsibility that must be shared by educational institutions and media.

The first screening services for cervical cancer were gradually improved in 2018 after a decline in war years, with the number of smear readers reaching 33 centers in different provinces and 19 cervical endoscopy devices.

Follow the latest news via Tilgram on Smartphones via: