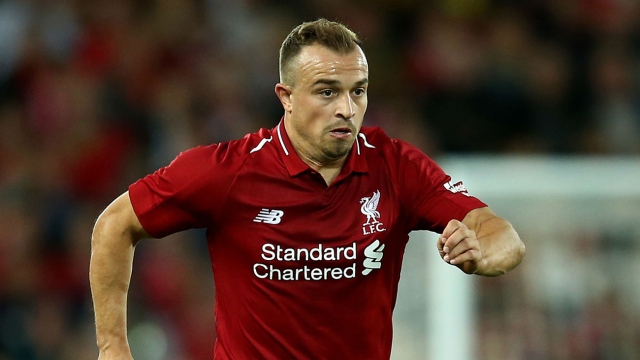 LONDON (Reuters) – Liverpool striker Sheridan Shakiri is out of the team for Tuesday's Champions League game against Red Star in the Champions League, the club manager said on Monday.

Shakiri, who was born in Yugoslavia to parents from Kosovo and Albania, angered Serbian fans during a match at the 2018 World Cup when he celebrated a goal for the Swiss team in a way that provoked Serbian fans.

Shakiri celebrated the way in which the hands were entwined with the thumbs to represent the symbol of the eagle of two heads. The gesture was a symbol of the slogan of the Albanian movement against Serbia during the Balkan war in the 1990s.

Serbia has not yet recognized Albania, and the Serbian masses have been angered by Chakiri's putting the Kosovo flag on his right shoe.

"The situation now is that we go to the wonderful city of Belgrade as a football team to play football," Klopp told reporters on Monday. "We hear and read about rumors and talks about how Shakiri can be received and although we do not know what will happen." With our full focus on football, we do not want to worry about anything else. "

The club confirmed that Liverpool had no political message to send.

"We look forward to being respected and eager to avoid any distractions that negatively affect the focus of the game, which is of great importance in terms of football only," he said.

"For this reason, Shakiri will not participate and expressed his acceptance and understanding. Shakiri is a player of our team and we love him, and we will play a lot in our ranks, but not in the game tomorrow."