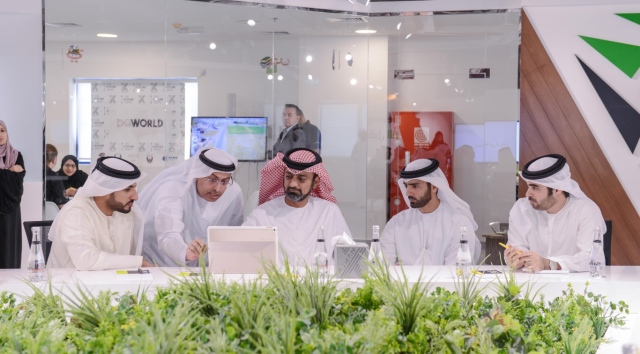 HH Sheikh Ammar bin Humaid Al Nuaimi, crown prince of Ajman and chairman of the Executive Council, approved a package of infrastructure projects in the emirate, costing 500 million dirhams and emphasized that Ajman's Municipality and Planning Department are following suit. confidence and caution to create a sustainable and sustainable structure to build the future of the UAE. And the adoption of differentiated projects and initiatives that reach their high goals.

He informed HH about the progress of work in Ajman City and Planning Department and visited Ajman X Center, which was established by the Department to be an incubator of technology pioneers from around the world, government agencies and the community.

His Highness said that the Department has an insight into the technological changes witnessed by the world through modern technology. It expressed its pride in the future series program, which resulted in four illustrious projects represented in the first autonomous bus project, Beyond the first responder project .

"The Department is concerned with human health and safety by adopting all projects that achieve this goal.We are accustomed to achieving the goals in an innovative way.Today we are listening to intelligent projects that reach the highest goals, including the Smart Mobile Food Laboratory , which will adopt the best techniques in a few seconds. "For the Rubetic Food Laboratory project, it will be the first fully integrated laboratory based on artificial intelligence. "

He added that the department, capable of completing the digital transformation, is now seeking intelligent control and sustainability, proposing the idea of ​​completing environmental monitoring through an intelligent vehicle that contains advanced equipment that specifies the source of emission and extent of commitment environmental. Data is self-contained without the need for an environmental specialist.

HH Sheikh Ammar bin Humaid also discussed the idea of ​​modernizing the 2019 federal system, which is a federal platform for food trade in the United Arab Emirates. The department is working through the system to electronically connect with the federal system and connect the system with the intelligent inspection system to support the inspectors in the field. Food safety and the role of regulators.

"We are accustomed to presenting projects to highlight the aesthetic touches of the emirate and today we are listening to the Ajman Art project, which qualifies the emirate as a city of events with all the ingredients and beauty standards," he said, adding that the project will include many artistic initiatives such as murals, and other arts that enrich the cultural and artistic movement in the emirate of Ajman. "

Sheikh Humaid bin Rashid Al Nuaimi, a member of the Supreme Council and Governor of Ajman, who provided and continues to support the provide all kinds of support for the success of projects and make them a reality. That is of interest to everyone in the emirate.

The head of the Municipality and Planning Department said the department is proud of the visit of His Highness, who proves on all occasions that the wise leadership in the emirate supports all departments with support and support.