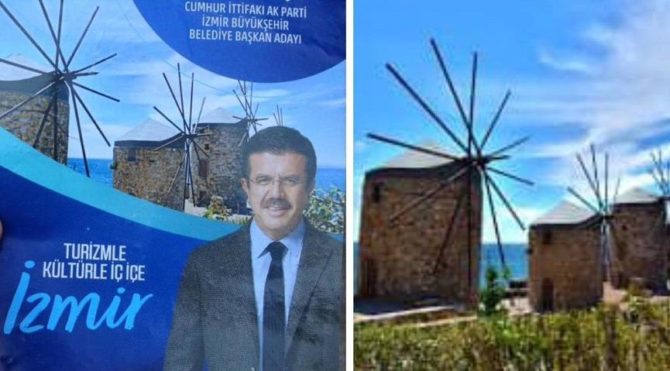 In the brochures distributed by the AKP candidate and İzmir's MHP Nihat Zeybekci for March 31 local elections, the photographs of the Greek island were used instead of İzmir.

The social media of CHP İzmir Provincial President Deniz Yücel, he shared with Zeybekci in the brochure "Izmir entwined with culture and culture", it was revealed that the photographs of the Chios Island of Greece were used.

The Greek island of Chios is one of the places frequented by thousands of Turkish citizens in the summer months.

The island of Chios is located in Greece, in the Aegean Sea, in front of the peninsula of Karaburun; The province that is called Khios and that contains this island and several small islands near the periphery of the North Aegean of Greece; and is the name of the city, which is the largest settlement on the island and the center of the administrative region.

Citizens reacting to the Zeybekci leaflets through social media;

Da Imagine that a candidate for mayor is not a photo of the province of the candidate is sharing a photo of another country is also a vote for me to buy bread, I have this kind of man.

I think I'm a fool if he thinks she's Izmir.

It's a laughing person.

In the late nineteenth and early twentieth centuries, in Chios, the mills of Chios began to be seen as small manufacturers. In these manufacturers, the most important product processed was leather. These mills were part of the period of these manufacturers. The mills are not used for now, but are visited only for tourism purposes.