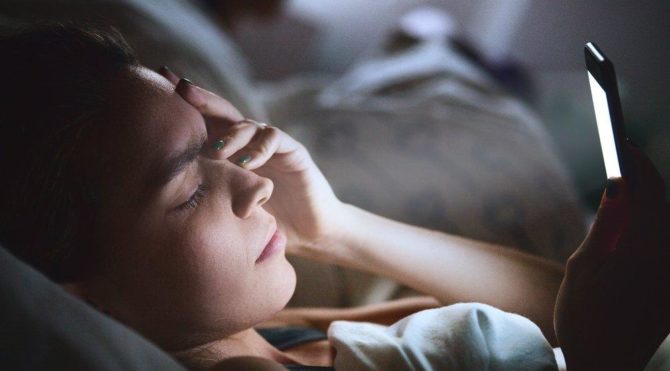 Hacettepe University (HU) Faculty of Medicine, Department of Endocrinology and Metabolism, Professor and Director of the European Association of Endocrinology. Dr. Okan Bulent Stars said in a statement, especially at night in children and adolescents in the long run the use of smartphones, tablets or computers is a growing problem, he said.

Stating that the study included two groups of adolescents aged 12-17 years in the Netherlands, Stars, 25 in the first group spent more than 4 hours per day at the beginning of the screen, the second group was less than 1 hour per day screened 30 participants they said.

"Participants in the first group were evaluated in three different steps, one week apart and one week each.

At the end of the study, it was revealed that the use of blue light-blocking glasses or removal of exposure improved sleep time, sleep quality and melatonin measurements and the level of sleep reached a level similar to those with less than 1 hour per day.

Professor Dr. Yıldız said that one of the most important reasons for poor and poor sleep in people is the use of smartphones, tablets or long-term computers at night.

Asserting that the problems were solved by limiting the use of smartphones and tablets, Yıldız said: "The results of the research are very important in terms of showing an improvement in the quality of sleep in adolescents, limiting screen time to only one week at night" .

Stressing that the wavelength of blue light on smartphones, tablets and computers mimics morning light, so the balance of the biological clock is disturbed and the production of melatonin sleep hormone is suppressed. "Triple. This situation causes fatigue, lack of concentration and a decrease in school success in the short term, facilitating the onset of obesity, diabetes and heart disease in the long run.

Yıldız, noting that previous studies have shown that time-related sleep problems have affected children and adolescents more than adults on the screen, he said. With this randomized sampling method, adolescent home exposure has a negative effect on sleep and this effect has a negative effect on the screen. It has been demonstrated for the first time that it can be corrected by eliminating the exposure or by wearing goggles against blue light. "

He stressed that the study showed that it is possible to reduce sleep problems in this group, even eliminating the exposure of the screen for a week.

Professor Dr. Yildiz, in future studies in children and adolescents to reduce exposure to the effects of exposure to the development of diseases such as obesity and diabetes and how the same approach should be evaluated in adults, he said.

Stress at work and insomnia & # 39; increase the risk of death 3 times in hypertension