21:50 The productions look pretty good, it's important that Oprah be included in the ranks of Apple, but this service is not clear how much money will be? Apple left us again with question marks as Tim Cook said goodbye.

21:45 Oprah, who is also his own television station, explains that he has combined his power with Apple. In many places, the world is able to talk to famous players and heads of state. One of his two productions for Apple is a documentary about sexual harassment, while the other is an unspecified film about mental health. 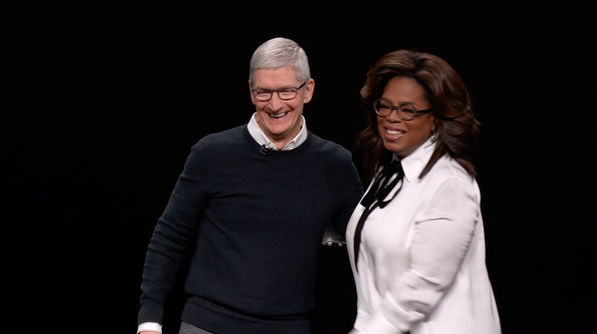 Wherever Oprah goes, the American president is welcome. Even those who want to be American president as well. The situation is no different in the hall of Steve Jobs. The audience applauded and the screams broke. The book club, which brings Oprah's books to the sales summit, will also be transferred to Apple. This is how you will use the world's largest book club on this platform.

21:40 The most interesting question is the price of Apple TV +. They have not explained yet. Tim Cook took the stage and said, "Now I'm going to introduce you to an important storyteller for you." 21:35 Other Apple series include The Little Voice and producer Star Trek and Star Wars JJ Abrams. Its creator is Sarah Bareilles. The series tells the story of being famous in the world of music. One day, when they were talking to Abrams, they had an idea. Bareilles now sings the song with the title. 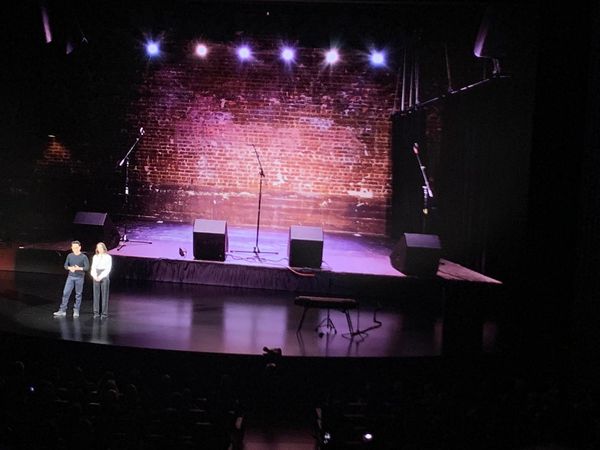 Apple is the locomotive of very ambitious names with the original productions in the world of strong flow. Netflix emphasizes more Hollywood stars than Hulu and Amazon. It will be released in more than 100 countries, there will be no ads, it will be watched offline and it will start next fall.

21:30 The biggest surprise of the day is the Little Bird of Sesame Street. Apple's Sesame Street with children's producers is preparing a new program, he says. The biggest feature of the program is being focused on coding. This program will be taught to write code for children from an early age. Silicon Valley will then begin to grow children of a younger age to suit its culture. The writing of codes came to enter the universities and has already become preschool.

21:25 You're going to bathe a star. Kumail Nanjani, a member of Silicon Valley, now tells the story of immigration from Pakistan to the US in the scenario of the giant of Silicon Valley. Emphasizing that America is growing thanks to the immigrants, Nanjani will tell the stories of these people in the new project and will be the other. One of the series's producers is Alan Yang, one of the creators of Master of None on Netflix.

21:20 Now, at Apple's star-studded launch, Jason Momoa appeared on stage playing Aquman. See the science fiction series will be published on the platform.

21:10 Spielberg on stage. Describes how he first met science fiction. As a child, he read in a magazine where his father read the stories of his imagination emphasizes that evolves. 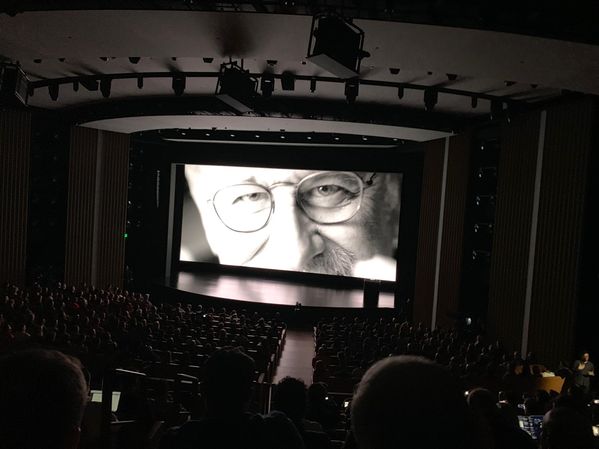 Spielberg, who visited the Apple Center for the first time, tells us that he will resurrect the narrative in the movies. The famous director had recently fought a war against Netflix, opposing the inclusion of Netflix at the Oscars. Apple's involvement in the digital show that Sipelberg can not resist. 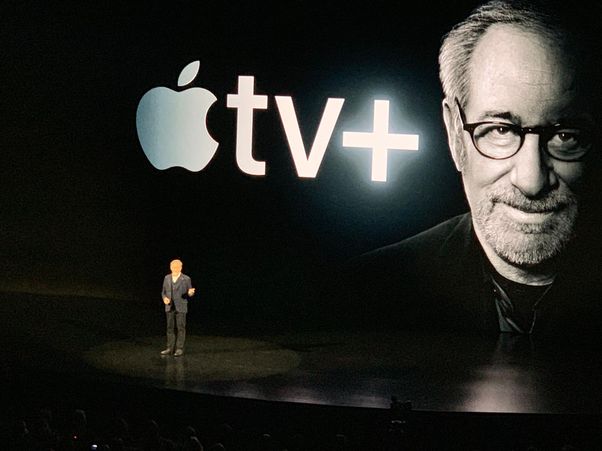 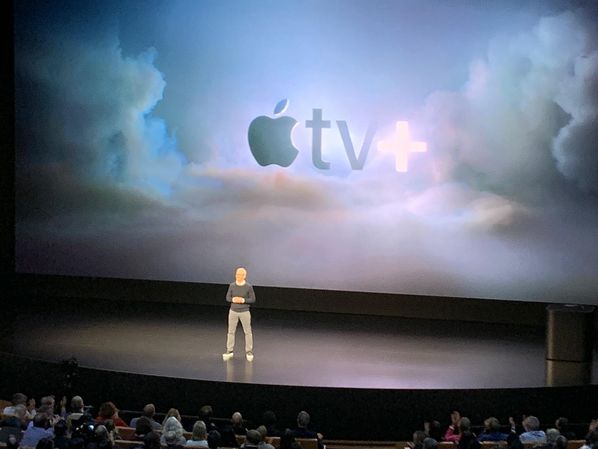 The series will examine the relationship between men and women on a television show in the morning. In particular, it will focus on how men behave in women at work. A 10-year-old boy whose parents were deported will be a series of real stories from a stand-alone motel business. It was said that Steven Spielberg would be in the hall, but for now it's just a video of a new service. So did JJ Abrams. We'll see if they're really in the hallway.

20:55 Thanks to the new Apple TV application, you can only pay viewers the television channels they watch in a single application. Thanks to Apple TV channels, the whole family will watch the channel without advertising. HBO, Showtime, CBS will be among them.

Apple emphasizes that the algorithm may find the best option for the viewer who can not find anything to watch. He says a good friend will replace machines instead of a friend. You will also be able to monitor the content of different services such as Amazon, HBO in a single application. Therefore, you do not have to switch from one application to another to watch another program, instead of the one currently on the Apple TV. With subscription service, you can play games on mobile devices, desktop and television. Apple will support its developers with game developers. The Apple Arcade subscription opens the door to more than 100 games and will not be available on any other platform. They also promise to add new games. Games will be played without internet connection. Advertising and payment in the game will not be. In the fall will begin in more than 150 countries of Apple Arcade, but the price was not disclosed. And there's a TV. Tim Cook is on the stage and Apple should announce the long awaited new streaming service. Another service that Apple offers today is the gaming service. The number of people downloading games from the App Store reached 1 billion people. Of course, many games are sold for money, but most of them are lost among free games and their names are not even heard. That's why Apple is working with game developers and launching a new subscription service. The name is Apple Arcade … In the United States, banking services are trying to ease the process by getting into the credit card business. You can earn 2 to 3 percent cash points using the Apple card. Apple is also trying to reduce credit interest rates on credit cards. Interest rates will be determined in real time according to different payment options. For example, once a week a debt is paid out of monthly payments, the interest rate will fall.

DISCUSSION, HOWEVER, YOU WILL HAVE A SAIL IN THE MARKET

Apple Card, card usage fee, delay limit, no usage fee. In US credit card services, American Express and Chase awards and prizes have rocked the industry in recent years. Therefore, it will be controversial how Apple will be attractive in this market with Goldman Sachs.

APPLE CARD GOING FOR THIS SUMMER IN THE USA

On the other hand, low interest rates attract consumer interest. Apple for places that do not pass the white, minimalist and chip company offers a physical credit card. The material of the card is titanium. The most important feature in the name only. Card number, without end use. The Apple card will be released this summer in the United States.

20.30 THIS IS USED IN PORTLAND, NEW YORK AND CHICAGO

20.25 Tim Cook is back on stage and talks about how Apple Pay is booming. Especially in the Far East, Apple Pay is widely used in public transport services. This year, in Portland, New York and Chicago, Apple PAy & ye will be on the subway. In addition, the application is spread to more than 40 countries. Apple Pay now also enters the credit card business. The innovation in claiming the credit experience change, as we know it, is the Apple card.

The credit card is called over the phone and is available in a few minutes. It is used all over the world and goes through all Apple devices. Customer service is also available through a text message. For example, iMessage is being launched when you want to change the address.

There are many journalists specializing in technology in the world and in America. Apple employees are attracting attention, encouraging visitors to take lots of photos.

20.20 THE NAME OF THE NEWSPAPERS WILL NOT BE PRESENTED

Apple News + also includes newspaper subscriptions. Previously, the New York Times and the Washington Post had spoken of this service coldly. Today's name is not mentioned in the newspapers. But the Los Angeles Times and the Wall Street Journal were included in the service. In addition, the verticals of New York Magazine behind the wall of payment will be reached through this signature.
WE WANT TO STAY 9.9 FOR APPLE SUBSCRIPTION

Apple announced that it would not follow which text was read, advertisers do not share this information and applause.
The cost of subscribing to all magazines on Apple News + is $ 8,000. But Apple will ask for this subscription at 9.99 a month. In addition, several users will use them for free.

Apple News + is spreading to Canada for the first time in the US today. In the fall, Apple News + will spread to England and Australia.

20:15 Apple News will be the first innovation to integrate into magazines.

The new service will be accessible via Apple News + and subscription. But Apple shares a video that mainly describes the cultural impact of journalism and journalism. At the moment the American president has been reporting false news to many media, Apple is clearly in favor of freedom of the press. Roger Rosner, vice president of applications, talks about the Apple News + service on the stage. More than 300 magazines will be held in this application. In fact, Apple News + looks like Texture, which the company already owns. In Turkey, Turkcell also provides a service like this rack applications magazine. But Apple has created some differences. For example, the photo on the cover of National Geographic is not fixed, it is in motion. Apple's new service, magazine pages, as opposed to transfer the application to the iPhone and iPad in a way that highlights the design. In a way, is this the complete death of the role? This is no longer the way the magazine page was designed, but how the content of the same magazine will appear on Apple products.

20:10 First of all, Tim Cook began to emphasize the services of Apple. He explains that hardware and services are better matched by Apple than any other. iCloud, Siri, Maps and Turkey emphasizes the importance of not Apple Pay application yet.

In Silicon Valley, the protection of security and private information is an important issue. Especially with the problems frequently experienced by Facebook, security has become more important. When Tim Cook told him how safe Apple products were, he received the biggest applause from the show. And Apple News. The revamped version of Apple's first service news service announced by Tim Cook today.

At Apple News, five billion articles are read each month and become the largest news application in the world. Every morning, Apple publishers bring together the best written news from different media.

Apple launches Steve Jobs's most famous advertising campaign, "Think Different," which began with the slogan. Tim Cook took the stage after a short video before 10:00 with the Cupertino clock. 19:45 APPLE EMPLOYEES IN THE WORLD WAS COLD

Those in charge of the Steve Jobs Theater today are working in different Apple stores around the world. They all came to Cupertino to launch other cities.

Good morning from Cupertino. The new Apple launch will start soon. We were in the lobby at 8:00 AM, local time, before the launch at the Steve Jobs Theater. We were waiting for the presentation of Apple's new product with the favorite of Silicon Valley.