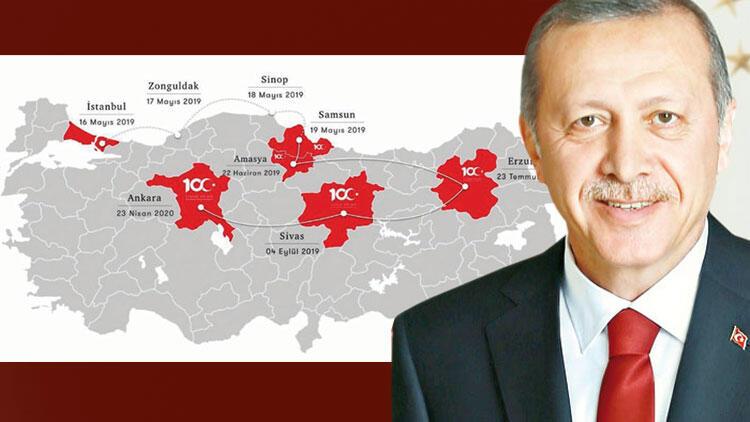 19 May 1919, Mustafa Kemal Atatürk and his comrades arms of Samsun, June 22, 1919 Amasya Circular of July 23, 1919 Erzurum Congress, to September 4, 1919 Sivas Congress, April 23, 1920 opening and Parliament October 29, 1923 Turkey The logo and logo of the corporate identity to be used in the 100th anniversary events of the creation of the Republic of Turkey was published on the website www.yuzuncuyil.gov.tr ​​prepared specifically for the celebrations. Erdoğan's one hundredth year message was included in the program of the event. In his message, Erdogan briefly used the following statements:

I live the happiness and pride of having reached the 100th anniversary of the process that started the National Fight. Gazi's torch that was burned at Samsun on May 19, 1919, under the leadership of Mustafa Kemal, was scattered throughout the country passing through Amasya, Sivas and Erzurum. The road entered with the announcement of the National Pact reached a new stage with the opening of the Grand National Assembly in Ankara. May 19 is the first step in the struggle for the existence of our nation that does not accept captivity, does not give up its freedom and does not submit to oppression. After the great victory that resulted in the enemy entering the sea in Izmir, we established our new state with the same belief. The Republic of Turkey is not the first of our nation, it is the last state in the history of thousands of years. Our Republic was built on the basis of national sovereignty and determined to reach beyond the level of existing civilization as its goal.

The most important turning point in our struggle for independence is May 19, when the celebration of Atatürk, Youth and Sport Day is a gift from Gazi Mustafa Kemal to our nation. On the occasion of its hundredth anniversary, we are planning to celebrate the celebration of far-reaching and much broader participation and the bridge that stretches from the past to the new generation. In this period when our country is undergoing major tests, we believe that all parts of our nation will protect the spirit of May 19 from young to old and from women to men. This spirit, which is shaped around national unity, solidarity and solidarity, is a symbol of the struggle we have given, as well as an expression of the determination and faith that has led to our War of Independence to victory. I am happy to see that all of our citizens are embracing their independence and destiny with the same enthusiasm today as exactly 100 years ago.

Our nation, against attacks by the internal and external attacks of the terrorist organizations turned to the homeland of the coup attempt of July 15, showed that the fire of the istiklal was never extinguished by resisting its courage a century ago. Paying our gratitude to our nation, we are working with all our strength to achieve our goals of 2023. Our goal is to succeed generations, are more powerful than they can celebrate the pleasant, prosperous and more peaceful 100th anniversary to leave Turkey. With these thoughts, I congratulate our nation, especially our young people on May 19, Atatürk Celebration, Youth and Sport. Gazi Mustafa Kemal Atatürk and his comrades in arms, as well as all the heroes, martyrs and veterans who have conquered our state and our independence, say Gazi

PRESIDENT Erdogan, May 19, 1919, the hundredth anniversary of the logo set to be used in activities. The Hundredth Year logo will be printed in all official correspondence from the Ministry of Youth and Sports, the Ministry of Culture and Tourism and the Government of Samsun. According to the Presidency of the Presidency Communication, the logo, corporate identity, event program and other announcements prepared for the 100th anniversary celebrations will be available on the website arı yuzuncuyil.gov.tr ​​dan. Istanbul, Samsun, Amasya, Erzurum, Sivas and all events will be held in Turkey, especially Ankara route Youth and Sports, Ministry of Culture and will be held in coordination with the Ministry of Tourism Presidency Presidential Communication.