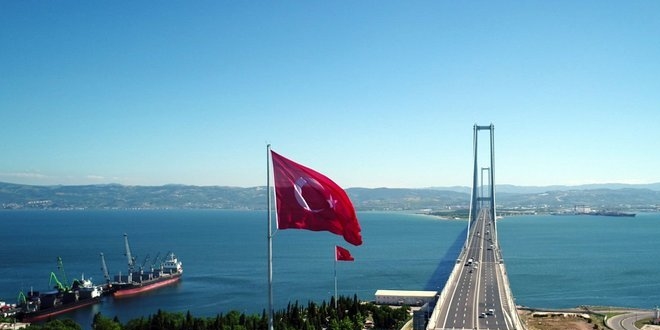 It is located on the Gebze – Orhangazi – Izmir highway, where the Osmangazi bridge is located. The sale of part or all of the bridge was lifted due to Italian Astaldi's financial problems. Contractor contractor for the NÖMAYG consortium, CFO Kerim Kemahli Bloomberg, said that they have begun negotiating with international consultants to determine the options. News about Otoyol A.Ş. made a statement. Although it is stated that the sale of shares in this size is a long process, emphasizing that the first phase is the determination of the value of the project and the determination of potential buyers. "used expressions

In August the foreign currency happened in Turkey because of the shock and foreign currency lending entering into the financial crisis and in October the company in the concordata application in Rome, Osmangazi Bridge where the percentage was 18.6 shares also stated that put up for sale or an entire section.

Kerim Kemahli, chief financial officer of Nurol Holding, a major shareholder in the NÖMAYG consortium that bridged, said in a telephone interview to Bloomberg that his goal is to find out what options they have for the bridge and whether they are of interest to them.

Kemahli stated that they will work with international consultants in this direction and that they plan to complete the selection of organizations that will work with sales or partial transfer within 2-3 months.

Astaldi wanted to sell his shares in the Yavuz Sultan Selim Bridge, where he had a 33% stake to raise capital in October, but then moved away because of its geopolitical importance.

There are 27% of Nurol, Mak-Yol and Özaltın Construction shares in Osmangazi Bridge, which is often occupied by the toll schedule.

Otoyol Inc. By 2015, the 400-km-long Izmir-Istanbul highway and the bridge over it had received $ 5 billion in loans from nine institutions, including Deutsche Bank, Akbank and İşbank.

In a project of this size, the sale of shares is a process that requires a lot of time. The first step is to determine the value of our project in international financial markets and identify potential buyers. Subsequently, our partners may segment a particular sale of shares in taxidermy that they deem appropriate. These objectives were initiated for the selection of an experienced international bank / financial institution that advises our company.