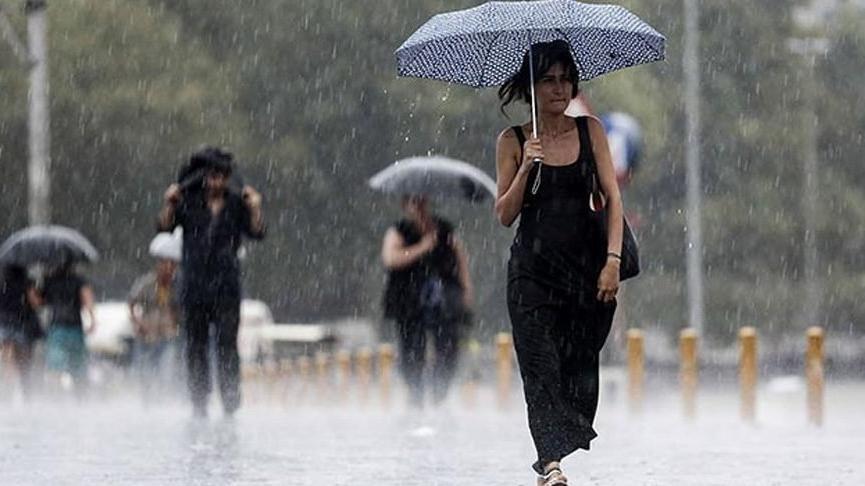 According to the announcement made by the Directorate General of Meteorology, the country in general until tonight, partly cloudy and partly cloudy, inland Aegean Sea, parts of the Western Mediterranean, Eastern Mediterranean, Central Anatolia, interior parts of the Black Sea, Central and Eastern Black Sea and Eastern Anatolia north of Edirne, Bilecik, Kastamonu, Sinop, Gaziantep, Kilis and Malatya north and west parts of storms and thunderstorms are expected to pass rainy.

Chove, Konya, Karaman, Nigde, Aksaray, Nevsehir, Kirsehir and Kirikkale in the south and west of Kayseri should be strong locally.

Flash floods, floods, lightning, hail, strong winds during the rain, interruptions in transportation need to be cautious and cautious.

There will be no significant changes in air temperature throughout the country, and they are expected to remain around seasonal norms.

WATER FLOW IN SOME BUSINESSES IN KARS

Due to the downpour in Kars, there were floods in some workplaces.

In the afternoon, the downpour that affected the city negatively affected the life. Organized Industrial Zone (OIZ) in some businesses, flooded due to torrential.

10 vehicles in the same area were buried in the accumulated water.

Traders tried to evacuate water from workplaces with their own means.

Beginning in the city at noon showers, threw the effect for the night. Due to the downpour, there were puddles in some streets and streets.

Especially in the storm of the city center, which is effective with some citizens caught unprepared.

Weather officials, according to information, the effect of the weekend rains on Ardahan will continue.

Some roads of the village were damaged due to intermittent rains in Karabük.

Last week, the city center and districts due to intermittent flooding occurring intermittently, the villages Salmanlar-Demirciler, Pirinçlik-Kahyalar and Kadi-Güneşli damaged the connecting roads.

The ongoing studies, examining the Secretary-General of the Special Province Administration, Mehmet Uzun, told reporters that intermittent floods and intermittent flooding damage some parts of the road, he said.

The elimination of damage and the occurrence of measures to prevent negativity may take a long time to express that, "We do our best not to experience any problems on connecting roads." To avoid flooding that may occur in streams and large rocks of the River roots are removed from the beds. 7/24 with our staff to avoid a problem at the beginning of our task. he said.

In a written statement from the Metropolitan Municipality, Trabzon started last night and lasted until the early hours of the morning from torrential rain.

Especially in the main arteries of the city center, some neighborhoods of streets and streets of the Ortahisar district, again in the city center of the ground and flood basements due to excessive rains occurred in the statement said: "Department of Fire Department 15 Department, 15 motopomp and 4 vehicles, Department of Sciences 29 people, 5 motopomp and 9 vehicles, TİSKİ Directorate General of 12 work machines and 39 people with normal return of transport, opening of the culvert clogged in the streets and streets and to eliminate the flood of houses and places of quickly intervened in the interventions. " was given.

In a statement, "Weather data for the next 3 days in our city thunderstorms are expected to report a sudden flood, likely to occur in our citizens, lightning, lightning, high winds during precipitation, local hail rain, such as to be careful and sensitive to the public will be careful, sensitive to the Metropolitan Municipality of Trabzon. We announce with respect to the public that all units are on stand against possible negativities. The statement said.

Traffic in Kocaeli due to strong flow of D-100 road traffic has returned to normal.

At noon there were floods in 2 lower passages as a result of rain overflow due to rain in the Yeni Eşme area in the direction of Kocaeli.

Partial flooding in some parts of the road on the road to stop traffic when the road had long lines of vehicles.

After the rain stopped and the water withdrawal formed in the mud of the road, it was cleared by road crews. City officials also did cleaning work on the pans of the underpass. After completing the work the teams returned to the normal traffic limping.

The AFAD provincial director, Kocaeli, Salim Tekoğul, arrived in the region and made investigations.

Some streets in the Eşme neighborhood due to torrential rain, flooded houses and workplaces. AFAD and municipal teams are cleaning here.

Senol Kilic, a neighborhood correspondent, said he saw the arrival of the flood in his house.

After an uninterrupted hour of downpour, the water from the upper parts of the stream suddenly came to express the sword, "D-100 land flooded the road. The road walls on the road of my neighbors' house was demolished, some houses also entered in the water., when the disaster increased the density ". he said.

Akın Akar, a restaurant owner, said that as a result of sudden rain pressure, water entered the business.

All the tables, chairs, cabinets, and other belongings in the water remained on the Akar River: "I left the mosque to my place of work, I was shocked by all the water.the road entered the stone shop.God bless the municipality of Kartepe, our friends are doing what is necessary. " he said.