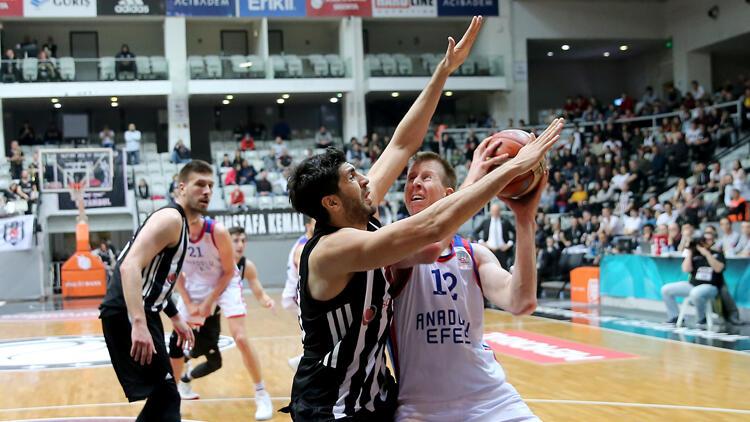 The invited team received a total of 19 wins. White blacks were defeated 11 times.

Anadolu Efes started the game well in attack, and was 12-4 in the third minute. At the end of the shooting and under the pot, the visiting team had difficulty finding the pace of the game. In the last moments of the quarter, Anadolu Efes responded to the black-white numbers found with Kenan Sipahi and Gibson.

Entering the second quarter with Sertaç Şanlı's basketball, Anadolu Efes finished 42-25 minutes with Doğşat Balbay and Yiğitcan Saybir. Besiktas Sompo Japan, the area that defends well the dark blue whites, trying to produce points behind the three-point line, could not close the gap. While the last moments of the match were played together, Anadolu Efes was ahead in the locker room with 14 points (38-52) despite Kenan Sipahi's three-pointer from his own semi-field.

The second half began with mutual basketball. Numbers of Buva and Erkan Veyseloglu found in the bottom of the pot and Besiktas Sompo Japan number in the 24th minute reduced to 10 points: 46-56. He did not allow his opponent to narrow the gap with Larkin's three-point marker and Anadolu Efes continued his pace on the outside pitches and spent the final 76-60 period.

Besiktas Sompo Japan, Pressey and Enes Berkay Taşkıran, who started the final period with the support of their supporters, picked up the OAO series in the 33rd minute and reduced the gap to 6 points in the 33rd minute: 70-76. The black and white team increased the defensive pace by narrowing the gap. Black and white, who scored consecutive outsiders with Enes Berkay Taşkıran, closed the gap a little further at 35 minutes: 76-80.

The final part of the fight was highly controversial. Anadolu Efes, recovered from the offensive, free kick from Larkin and Micic struck the last 2 minutes and 18 seconds was 87-81 over 18 seconds. The home team reduced Gibson's number to 3 points (84-87). Pleiss and Larkin's basketball found Samet Geyik's blue-white three-point basket responding to Besiktas Sompo Japan, 6 seconds before the end of the gap, reducing the number 1: 92-93. Anadolu Efes, who made no mistake on the free-throw line against the opponents who completed the foul, brought the score to 95-92 with 4 seconds remaining. The team of guests, the last attack was unable to produce black and white team was defeated 95-92.

On the other hand, Rodrigue Beaubois, Krunoslav Simon, Adrien Moerman and Bryant Dunston, who were tied to the foreign border at Anadolu Efes, followed the fight with the tribune.

In addition, Australian striker Brock Motum, a white team, was injured in the 35th minute and could not continue.

The three most beautiful moves of the NBA …