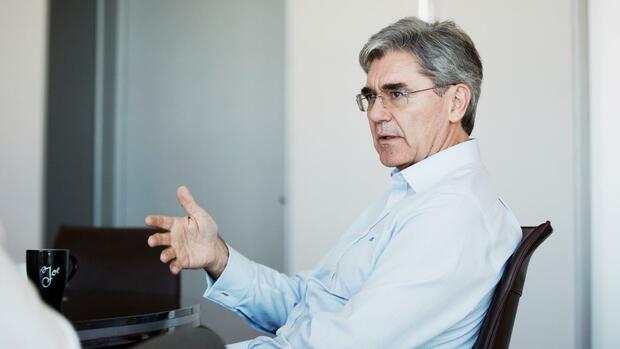 Munich, BerlinThe wealth of oil in Saudi Arabia magically attracts Joe Kaeser. After the CEO of Siemens recently canceled his participation in the October "Future Investment Initiative" congress, Davis in the Desert, he is apparently planning a different trip to the Kingdom.

At a conference hosted by the world's largest oil company, Saudi Aramco, Munich's technology group will act as a "platinum sponsor" – and CEO Kaeser will speak on a panel on "Location of Production in Saudi Arabia" on November 26.

The performance falls on a delicate period when the brutal murder of opposition journalist Jamal Khashoggi puts a strain on relations with Saudi Arabia. According to Turkish investigators, Khashoggi had been killed by a Saudi command specially arrived at the Kingdom consulate in Istanbul.

Over the weekend, US media reported that the US intelligence agency CIA assumed that Crown Prince Mohammed bin Salman personally ordered the assassination. According to a Washington Post report to which Khashoggi wrote as a columnist, Crown Prince Khashoggi's brother would have assured on the phone that his visit to the embassy was secure. It is unclear whether Brother Khalid bin Salman knew of the planned murder. It seems certain, however, that the call took place at the behest of the Crown Prince.

For the business club

Donald Trump called the reports on the CIA's assessment on Saturday "premature." The US president announced that he would publish a comprehensive report on the Khashoggi case in the coming days. The US has already imposed sanctions on 17 individuals on Thursday.

The fact that Siemens CEO Kaeser is planning a trip to Saudi Arabia again could make him the target of criticism. It was only in October that Kaeser hesitated for so long by canceling his participation in the Investor Forum in Riyadh that the generally high moral standards that stood for top executives came under heavy criticism. Jamie Dimon (JP Morgan), Richard Branson (Virgin Group) and IMF chief Christine Lagarde had already been canceled significantly ahead of them. Siemens took so long that the company had to pay for its booth at "Davos in der Wüste".

In Dhahran, Saudi Aramco's headquarters, Kaeser now discusses "Vision 2030," the immense reform program of the imposing Crown Prince Salman. According to the program of the "Inca Value Total Value Conference" (Iktva), the head of Siemens should discuss how the UK's industrial production could be increased in the future and how Saudi Arabia can become the production center for throughout the region.

Kaeser will discuss with a vice president of Aramco, Saudi Arabia's Deputy Minister of Energy and Industry, the head of the Saudi Industry Localization Initiative, and the CEO of the US-based Jacobs Group.

Saudi Arabia is an important sales market for Kaeser. Among other things, Siemens manufactures turbines in the east – where large oil fields are located. In Riyadh, the Germans are involved in building the subway. In addition, Kaeser is concerned about the oil services company Dresser-Rand. The US company bought in 2014 for $ 7.6 billion, which many criticized as very expensive. Aramco, as the world's largest oil producer, is considered a major potential customer for the division.

Kaeser is traveling in the Saudi kingdom with great personal commitment, but also in Egypt, Iraq and other Arab countries.

For a long time, the 61-year-old Niederbayer was able to count on political support. But good relations between Germany and Saudi Arabia have been notably cooler for some time. And not only since the murder of Khashoggi. Sharp remarks on the "foreign adventurism" of the Kingdom of Sigmar Gabriel (SPD) last year also infuriated Riyadh.
As of November 2017, the country withdrew its ambassador from Berlin for almost a year. Gabriel was at the time of his statement by the German Foreign Minister. The model of a Siemens turbine, which for a long time adorned the reception room of the Saudi embassy in the Spree, disappeared after the return of the main diplomat in Riyadh.

So far, Siemens has just confirmed that Kaeser will be the speaker at the congress. He continues to apply what he said in his riad cancellation. At that time, Kaeser had emphasized that now, on the Khashoggi issue, truth must be discovered and justice must be done. At the same time, Kaeser also emphasized the importance of dialogue.

It is always better to talk to each other and not to each other. E: He suggested that the Saudis' "2030 Vision" could spare Siemens a sales potential of $ 30 billion. According to industry circles, the company has a good chance of a large order of up to $ 20 billion, which is now in danger. Kaeser declined to confirm this, but recently pointed out at the annual press conference that such large and potential contracts also secured employment in Germany.

The Supervisory Board understands Kaeser's difficult situation. "It's really a dilemma," said Inspector Handelsblatt. "It's hard to get out of moral discussion, and it's often not fair." Large power plants were built primarily in countries where industry and society were still evolving. It was certain that Kaeser canceled in the heated situation of Riyadh. But the group does not sell guns, and it's true to keep open channels.

In Kaeser's environment, they did not want to decide whether the Siemens boss would actually participate in the Saudi Aramco event at the end. Topics are in flux, Kaeser observes development exactly.