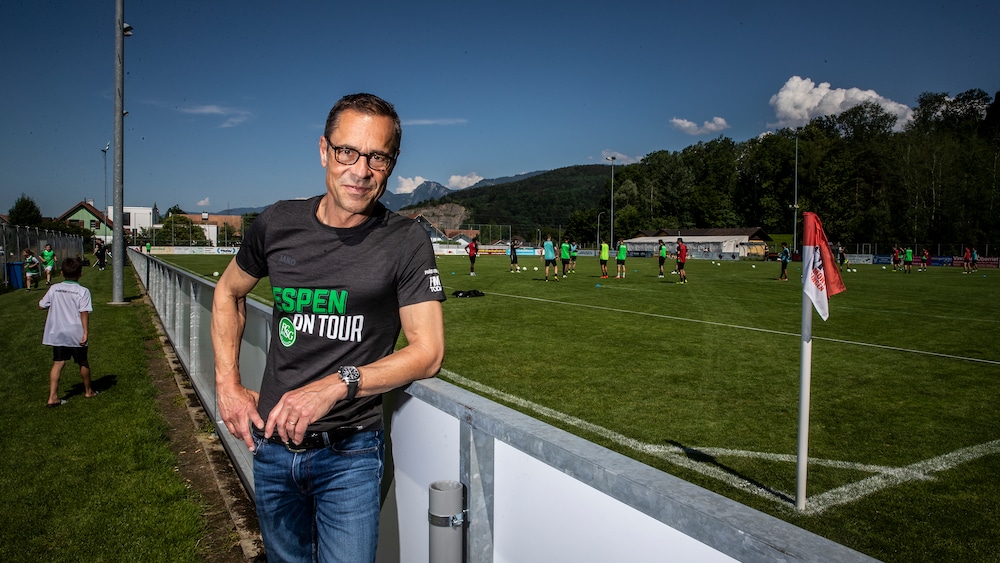 St. Gallen president Matthias Hüppi tells how he comforted a crying player, what he plans to do with St. Gallen and how he sees Alain Sutter's negotiations with Nati.

Blick: Mr. Hüppi, you're here in Montlingen SG on the inside because of your Espen on Tour project: Should higher paid soccer players be less retracted?
Matthias Hüppi: It's good that everyone is simple and modest. It's great to bring players closer to people. In fact, at FC St. Gallen they are not very well paid in comparison to other clubs.

Players with you will also earn between 6,000 and 25,000 francs per month. This is much compared to a construction worker.
A young professional football player does not earn nearly as much here. But of course they are comparatively high wages. Time as a professional is also limited and we also work hard with profit sharing.

You save lots of money now. They were in third place in the last round, which meant the direct qualification of the Europa League. And in the end, sixth.
Yes, but we would love the additional revenue. Three games in the group stage of the Europa League at home would have been sold three times in St. Gallen.

How long have you been chewing this?
I was very disappointed at first, but then quickly helped rebuild. This is how I understand my job as president. After the game at FCZ, which we could have won at 86 minutes through Majeed Ashimeru, I immediately took care of the players and the staff. Ashimeru sat in tears in the locker room, barely recovering. In the face of this image, I was extremely angry with some people.

how far?
Again and again they said: You with your lenders. They do not identify, they do not get hurt at all. Then I see Ashimeru, then in tears.

Yeah, well, but financially it's bad. Ashimeru was good and has to return to Red Bull Salzburg. Vincent Sierro is strong and YB the purchase of the owners club Freiburg. There are millions of you going through the rags.
We both would like to fix it, but we did not get a chance. And if YB wants Sierro, then we would not have a chance with our offer.

There are rumors that 2.5 million euros have been transferred, which Freiburg wanted.
And with us the whole budget for the first team including staff is 7.9 million francs. Sierro impressed me a lot. He called Alain Sutter, Peter Zeidler, and I personally. Thank you and informed us about moving to YB. Ashimeru also thanked us by SMS. Both mean FC St. Gallen. It is not always about numbers or success in life, but also about humanity. Always aware that we will also have to win games at FC St. Gallen, otherwise everything will not help.

You've been in St. Gallen for a year and a half. How has your life changed?
It became even more intense. The layout for the extra mile I've shown on television, but the pace is bigger today. I just moved in with my family after 27 years in Aargau, in the St. Gallen region. I would never do it without her support. She is body and soul. I played in a band, was on the board of Mutschellen and also very active. It will not leave you cold when you say goodbye to everyone. I very much hope for a bowl game with St. Gallen there, that would be amazing.

You were totally inexperienced at the beginning of your term. What did you do well?
We had to make many changes. Informing someone that you can not or will not work with them is a difficult task. Change processes usually have few followers. It was about engaging those involved, not a simple process.

What have you done wrong?
I do not cross the corridors here and shout, "Hooray, I'm doing everything right." I learned something almost every day for 18 months. Anyone who has to make decisions sometimes makes mistakes. I can always stand for that. But football is and remains unpredictable. Anyone who thinks they can influence everything is wrong.

How difficult was it for you to always be tried?
That was not news to me. As a moderator and commentator, I was more on the roof than as president. But I'm always ready to face the team. Praise and good fortune are part of this work. By being open to people, feedback is also open. And this club has incredible energy: I cross the city, I need a three-and-a-half-minute walk easily 20 times, because a lot of people argue with me. I like it

How do you really capture enthusiasm?Last season we sold 8000 season passes, we expect this year a similar number. This is the third highest number after Basel and YB. And that's almost twice the FC Luzern, which is always compared to the enthusiasm and the area of ​​influence.

His uncle Kurt Furgler, a former federal counselor, has always been at Espenmoos. Would he be proud of you?
He would certainly be a benevolent critical companion to my work, as was the case with television. Express criticism is important, also internally, before me no one should be afraid. Everyone can express their opinion, this is part of a respectful approach. I never hang in the office, but I'm usually away from home. The exchange is important.

When was the last time you took part in a ski race?
At the World Ski Championships in St. Moritz in February 2017. When I last commented. Since then, I've only seen it on TV.

How do you experience the world of television from a distance?
There are more and more ways to consume sports. This process was already in progress when I left the SRF. Sport always has the advantage of the live effect. This plus will never die.

Are you still following SRF?
As part of my temporal possibilities. Not always. But in football I'm already looking at your fingers …

How do you find the Champions League on Teleclub?That would be presumptuous if I distributed notes. I like the fact that Swiss football is on SRF and pay TV. If, as in the countries, the Champions League is all about PayTV, then you exclude a part of the public. This is not good

Does the Swiss club get enough money through TV?
I can not estimate the potential yet. I also try to get involved in this topic with my league experience. and whenever possible participate in all events. In general, I feel that my opinion as a newcomer finds ears open.

Now you have Jonathan Klinsmann as a new goalkeeper: was father Jürgen also involved?
No. But, as Alain Sutter said, he will be in Germany at the beginning of the next second half and then will arrive at the stadium.

Are you missing Tranquillo Barnetta?
Yes. It leaves a big gap, but now we have to look forward. He was an exception, but now he can distance himself and focus on other aspects of life, and so I hope to do everything to keep us, not just a fan.

In which paper?
He has to decide this on his own. There are certainly opportunities in the offspring, or in the top football environment or as ambassador.

Alain Sutter is being courted as Nati's manager. First conversations took place. After consulting with you?
Yes. It would be intolerant to forbid anyone to take part in lectures. For Alain, it is a compliment and appreciation for his work here in St. Gallen.

Are you afraid of losing it?
Fear would be a bad guide. There is transparency between us.

You spoke recently about an increase in the league. Because?
I would like 12 or 14 teams because teams like GC, Lausanne, Aarau or Winterthur have potential for the Super League. A ten-league can become monotonous because fighting Barrage Square will not always be as exciting as this year. Let's hope ….

For a moment you were afraid you might catch St. Gallen.
The tension in this phase was extreme .. Since you can be third but at the same time also go down. Third, we would have been overpaid this season, so be honest. But if you then see this crazy game of Aarau against Xamax … Then I'm only godfather, we saved ourselves before!