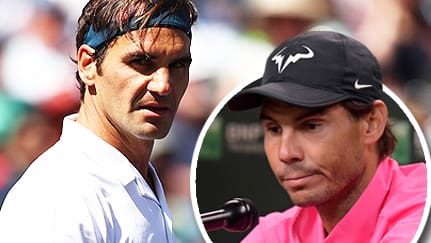 Pain in sneakers is normal. You just need to know how much is too much, says Roger Federer.

Roger Federer's semi-final classic against Rafael Nadal did not happen in Indian Wells – the Spaniard had to fit because of known knee pain. The Swiss lost in the final then against Dominic Thiem. But because he feels so physically perfect, defeat is easy to digest, he says.

A bit in the stomach, however, beats the question of a journalist: Nadal is accustomed to his own words, playing with the pain – could you do that too?

The highlights of the match

Federer responds harshly, "Yes, I can do that and I've done it quite often, it's always done as if I'm completely spared from the pain, I believe that Rafa and I are the two players who suffered most in their careers! "

Federer can bite his teeth

If so, that can only mean one thing: Roger is incredibly good at biting his teeth! In addition to Nadal, there are some who seem more vulnerable to injury than he. A Kei Nishikori, Milos Raonic or Juan Martin del Potro constantly have to cancel tournaments because of physical problems. "If the pain is too extreme, too hard, too dangerous, you can not play any more logically," says Federer. The recipe is to correctly classify the diseases before they become a serious injury.

As in many other sports, wear is also part of the daily routine of a tennis pro. "You never go through the tournaments every week of the year without injury or pain. Also from my over 1400 games, many were in pain.

You just have to be able to handle it, but he and Rafa would not have to cling to the big bell. "We certainly deal with it differently. Talking about pain does not help, it only helps the adversary."

For Roger, it seems like time to say it clearly.