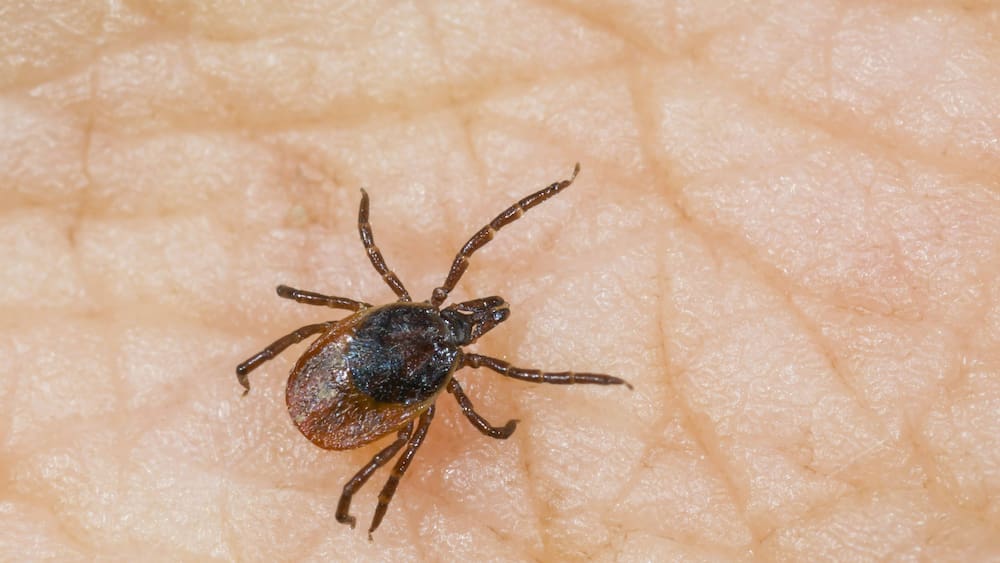 Suddenly, almost all of Switzerland is considered a risk area for ticks. If above 1500 meters or in the garden – nowhere is it safer.

It's tick time again. Werner Tischhauser (44) expects an increase in reports of tick bites during the Easter holidays. "Not biting," emphasizes the environmental engineer at the University of Applied Sciences in Zurich (ZHAW), who grew up in St. Galler Rheintal.

At the campus of ZHAW Grüental in Wädenswil ZH, a mobile application was developed with which tick bites can be reported and the puncture site can be observed. The Tick Tischhauser researchers have a very precise view of where in Switzerland many ticks are active, thanks to the messages from the application.

Ticks next to the campus

Not far from the Grüental Campus, TISCHhauser BLICK leads to a meadow at the edge of the forest. Before entering, he pulls the socks over his pants and sprinkles them with insect repellent. The researcher prevents ticks from crawling around the ankles and stinging them. Then he picks up a stick with a piece of sheet hanging from it. With this white flag, Tischhauser caresses the meadow a few times – and a tick is already hanging on the sheet. "If it gets warmer in the next few days, the ticks are more active," warns the scientist.

A few meters ahead, in a wooded area, he flicks the flag on the ground again. "Ah, a nymph," he says, pointing his finger at a black dot. As small as the eight-legged, one-millimeter arachnid, you can barely see it in your clothing or body. "But she sucked in some blood last year, developed a nymph and is now waiting for the next blood host," explains Tischhauser.

Meanwhile, almost all of Switzerland is considered a risk area for ticks. Only in Ticino and Geneva is vaccination of ticks against TBE meningitis not yet recommended. This is due to the warming of the weather, you hear again and again. But is this true?

"There are indications that high sustained temperatures are beneficial to ticks, and they may develop and multiply more quickly." But this is not yet scientifically proven, "says Tischhauser. and the increased fear of tick bites leads to more reports.

However, there is increasing evidence that warmer weather favors the small leeches. In Flims, Flims, scientists at the University of Zurich have detected ticks at a height of 1,800 meters.

Such contradictions also explain why the heat of Ticino has not yet been declared a tick area. Although leeches probably also exist there, there was not a single case of TBE in the southern canton. Scientists suspect it might have something to do with the biggest drought on the southern side of the Alps.

More and more ticks are lurking in the garden

But in another area the ticks spread: "We promote biodiversity in our gardens, and we are happy when a hedgehog comes, but with the host animals ticks probably also enter the front gardens." about 20% of tick bites occurred during gardening was inferred, according to Tischhauser.

And cases of FSME were reported very often in 2018 with about 380 units. In 2010, there were 100 cases. Are ticks becoming more dangerous? Werner Tischhauser remains cautious: the strong increase in 2018 compared to previous years may also have to do with the ideal climatic conditions for leisure activities.

While about four ticks can transmit Borreliose bacteria, FSME is much rarer. "But those who are not vaccinated can be infected with the TBE virus at the time of the sting. The consequences can be severe," says the scientist. In rare cases, the infection can be fatal.

Keep an eye on puncture site

On the other hand, you can not vaccinate against Lyme disease. Unlike TBE, infection by the Lyme disease bacteria does not occur with the bite. The faster the tick is removed, the more likely it is that no infection will occur. However, Tischhauser advises to keep an eye on the puncture site for signs of Lyme disease during the first four weeks. If a reddish ring spreads through the puncture site, you should consult your doctor. It can treat Lyme disease with antibiotics. The tick application helps to remember after weeks in which exactly the tick was stabbed.

So that it does not even reach a tick bite, Tischhauser pleads not only with appropriate clothing and tick repellent to protect against bites. But also to look for the whole body after ticks. "Above all, it is important to take the body exam with the children," says the scientist.

With joy back to the "death zone"

As beautiful as the ZHAW Grüental Campus with its view of Lake Zurich is located, both can be taken from all leeches to more urban areas. There, where there are only paved roads and gravel paths, where these arachnids are not found. "These are real death zones for ticks," is the good news for hikers and runners today. And there's another good news: gardening can wait – too dangerous without ticks.