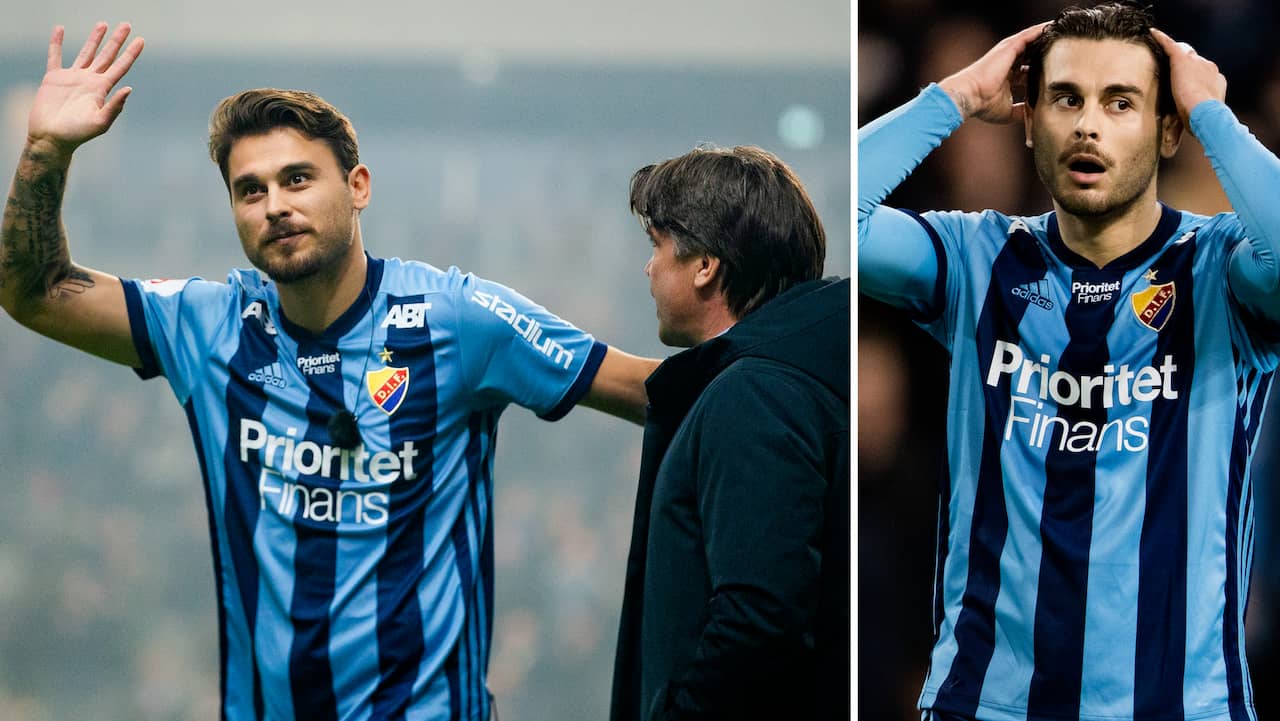 Astrit Ajdarevic sits on a couch in the middle of Stockholm.

The spring sun warms and shines on the water and the allsvenska premiere is just a few days away. Despite this, Ajdarevic is experiencing a chaotic daily life at the moment. His wife, Mimoza, is the home of Gothenburg with his two newborn twins as he travels between family life on the West Coast, training in Kaknäs and trying to put everything in the capital where his family eventually moves.

"I have not gotten to that yet. It was a bit harder than usual. Luckily, I have a strong wife who knows how to handle our children well, he says with a big smile.

A career in football has taken him to everything from Liverpool, Standard Liège, Charlton Athletic and AEK Athens. After hitting Atenderbyn against Olympiakos, celebrating a gold of the Greek league in front of 120,000 fans fanatics, Ajdarevic found calm of Stockholm.

Now he wants to show his best team in Djurgården.

"We really have something good going on. There are many skilled players.

Six miles from the town of Sokobanja in the eastern part of the former Yugoslavia.

Astrit Ajdarevic's father, Agim, is in the town of Nis and has just signed a deal with Radnicki, who plays in the high league. After winning goals in Yugoslavian football, he finally got his first professional contract. This also became the starting point for the Ajdarevic family football tradition. Despite some club changes in Yugoslavia, the career did not last long in the Balkans. After the 1992 season, Agim, his wife Emine and Astrit, a two-year-old, traveled to Sweden on holiday to visit relatives.

During the same period, the Balkan war broke out. Agim and Emine, who are Kosovo Albanians, decided to stay in Sweden and Agim soon got a contract in Falkenberg. It was here too that Astrit began to breathe football when he was young. When Father Agim trained with Falkenberg, Astrit stood by the plane and learned his first Sulfur.

For him, his father's journey was a great inspiration.

"He always told me that I have to do something else if I want to, not that he forced me to play football. I received a lot of help and was lucky enough to have it in my life. But it's not just a father, but I also want to highlight my mother, who has been through a lot.

What did they mean to you?

"That made me who I am today. My two brothers, Arben and Alfred, also play football and I am now their model. They are very determined and want to achieve as much as possible. We are a soccer family and my sister Adelin has also played soccer.

"It was a wow feeling"

He invites himself with pleasure, reflects on various topics and speaks openly about what he thinks. The adventure in Greece made him grow up as a human.

– I had to win a Greek championship with AEK Athens last year. It was a cool feeling and I did not win so much in my career. To win as an experienced player in such a great club, this gave me an extra kick. It was a feeling of pride and now I want to win again.

Before the AEK Athens beat the league last year, the title was won in the 1993/94 season. So it's not hard to understand that last year's gold team has a very special place with fans.

"We are immortal to the people of AEK. I'll carry it with me for the rest of my life.

How is the football climate in Greece?

"It's different from Sweden, it's like day and night. When it comes to Stockholm clubs, Malmö FF and IFK Gothenburg, it's almost comparable, but imagine when you have between 10 and 15 sports magazines that write about three clubs in Athens. You go aimlessly in Athens and people find out. People are burning and dying for football in Greece. There you go from day to day, if you lose a game you are the worst and when you win you are God. If you decide a match, the precise trend can last for six months.

– My life lasted a year, haha!

What was the strangest thing you experienced in Greece?

"It happened so much I do not know where to start.

Ajdarevic laughs, corrects his glasses with his index finger and continues.

– We had a game outside and they took us by bus. In Greece, the big teams always have police cards for the arena. Before a departure out in Lamia, we had a police card that accompanied us to the city and our bus drove so clearly behind. Although we were escorted by the police, we got speeding tickets from another police patrol just because we were at AEK Athens. The police car was in front of us and we still got a ticket. This is very sick.

Could not the police do anything? Were you escorted?

"What should they do?" They said "you drove too fast" and then we still followed the police car, haha. This is completely sick. It happens only in the countries of the Balkans and in Greece.

Do all major teams have "their" judges in Greece, or is it prejudice?

"It really is not prejudice. Sad to say, but it's a bit. You almost know what to expect when you reach certain arenas. Sometimes you thought, "Okay, today's Jannis, so it's going to be difficult." But in the Balkans and in Turkey it's a bit more about the judges, the only thing you can expect is to disappear. Now the derby in Greece is condemned by foreign judges.

In November, Ajdarevic broke the contract with AEK. He feels that he and the club have been separated in a good way and now he just feels a great deal of pride over time there.

"It looks like we're done in a good way and we respect each other.

Astrit Ajdarevic sees the staff inside the restaurant, who rushes in and out. He takes a sip of his cappuccino before we play another topic. If you followed Ajdarevic's career journey, you have a vision that has been able to read up close that he was described as a mood player.

Ajdarevic is thoughtful about the set of stamps.

"All journalists are experts at everything. I can explain a little as I am, but I think you have to spend time with me to understand how I am as a human being. You are invited to judge me about the plan, but do not judge me from the outside. Those who have field layout usually get stamped easily. It's not just me, but there are many in all svenskan.

I suppose you used conversation as motivation?

"You know what, I could not care less about what people think and think about me. I did not change for five cents, no matter what people said about me. It gets clicks apparently and it's up to journalists to write some things down. They should continue with this, but it is almost shameful to judge people when they do not know them.

What picture did you take from Djurgården?

– Until now it was only positive. We win games and people say Djurgården has something good going on. People do not always talk like that. But it seems like it's very positive about the association and that people appreciate the team players and the football we stand for. A big part of that is the coaches who made sure we played that way with speed and fan.

– In the end, it is up to the players and those who have gained confidence so far have done very well. We have good competition in most positions, which is important if we want to get far in the Swedish language. But at the same time everyone can beat everyone in this series.

What attracts the challenge in Djurgården?

– What appeals most is that AIK just won the SM gold and my hunger to make sure the other clubs in Stockholm did not win. That's what attracts the most. We'll make sure to win instead. I was not here when the AIK won, but I will try to ensure that during the time I am in Djurgården AIK or Hammarby do not win gold, but we won.

"My dream is to win something in Sweden"

You said in your first interview that you will win gold. will you do this?

– I received indications from Bosse that he will go all-in to win the SM gold. Your goal is to build a team as strong as possible. Based on the players we have now, our way of thinking with the football we want to play and the words of Boss, is one hundred percent possible.

On Monday, he makes his first match at Allsvenskan for Djurgården at home against Gif Sundsvall. Ajdarevic breathes expectation and hope.

It's time to fill in a blank sheet with new memories. When the referee whistles the match, he begins his journey towards a new title.

"My dream is to win something in Sweden.

– I'm from Sweden and allsvenskan is a league that I need to win before I stop playing football. Although it is important that you leave an impression as a good person as well.